Most of the changes made to the SkyDrive desktop app for windows through the latest update will not be visible as Microsoft has worked towards improving its performance. The software is now more reliable compared to its previous version and boasts of a new status window and a new logo, says the official Windows Steam blog.

The renewed status window comes in handy to check whether SkyDrive has been synchronized or not. A small window appears as soon as users click on SkyDrive in the system tray, which is responsible for informing them about current status and even when it was updated last. And in case the synchronization process is going on, it displays the amount of data and the number of files that are yet to be synced.

“We designed SkyDrive to provide Windows customers access to important files anywhere. With the upcoming release of Windows 8, the time was right to redesign the SkyDrive logo. The refreshed logo is a natural evolution of the work we’re doing across Microsoft to deliver a more consistent experience across all of our products,” reads a post by Mike Torres on the official Windows Steam blog. 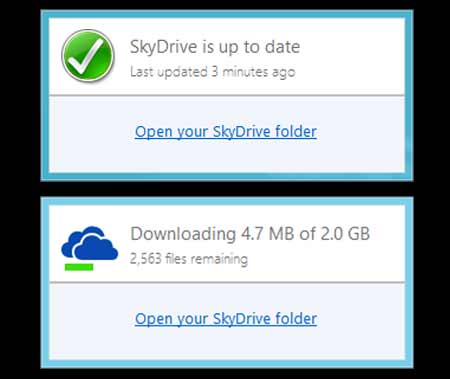 Also, the inclusion of new options in the context menu should help subscribers with not only identifying issues, but also reporting them. It can be accessed by right clicking on the screen and selecting ‘view sync problems’ or ‘report a problem.’ The company has even redesigned the SkyDrive logo which will be released for other platforms as well, when the respective apps are updated.

The automatic update for the SkyDrive desktop app for windows has been released.