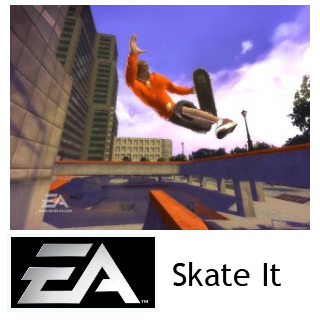 Electronic Arts (EA) has announced Skate It, a new game designed exclusively for the Nintendo Wii and DS gaming systems. Skate It is an innovative game complementing Wii Sports having support for Wii Balance Board.

Skate It features the popular FlickIt controls letting gamers use the Wii remote or the Nintendo DS stylus to enjoy the skating ride. The motion sensitive Wii remote becomes a skateboard and reacts to gestures that mirror actual skate flips and moves. Gamers can also enjoy the game with the Wii balance Board instead of a Wii remote.

“We knew it would be an exciting challenge to bring the soul and feel of skateboarding to the Wii and Nintendo DS,” said Scott Blackwood, Executive Producer – Skate franchise. “With fresh new designs and gameplay components built from scratch, we’ve been able to, once again, capture the true experience of skateboarding in a completely innovative way.”

Skate It is expected to ship this year. However, its pricing and availability have not been announced as of now. Also, EA announced that Skate 2 for the PlayStation 3 and Xbox 360 is under development.