Apple has its own cult-like following all over the globe. Even in countries where the Cupertino-based company is now getting its due popularity, it is not failing to mesmerize people instantly with the products that make the first impression by their out-of-the-herd look. 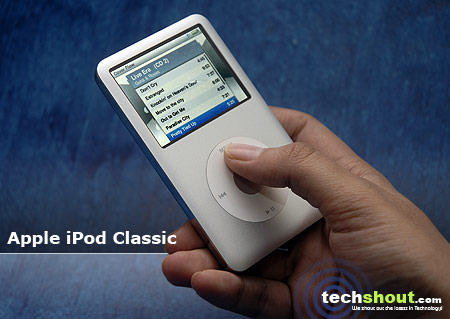 This year, Apple launched its next generation of iPods, which were much awaited by a large chunk of young generation worldwide. Here we review the sixth-generation iPod Classic 120 GB for those who are deciding whether to follow the cult or not (it is also our attempt to understand what makes Apple the revered brand!).

Let us start of with what really impressed us first, the 120 GB capacity! Okay, iPod Classic was earlier available in the 160 GB flavor, but 120 GB is no less and this being the highest capacity available in the Apple iPod family as of now.

Now about the looks, a shiny steel back that gleams gives a class to the iPhone which gets soiled with fingerprints within a matter of seconds. This is surely going to irritate those who have a penchant for good-looking clean gadgets and especially to the ones who would like to flaunt their iPod. The front of the iPod Classic is anodized-aluminum, which distinguishes iPod Classic from other portable media players and makes it the ‘iPod Classic’.

Also contributing to its classiness is the ‘click-wheel’ that is still seen in the player. Now the click-wheel reminds us of the occasional non-responsiveness we experienced with it. So when your click-wheel turns into a lazy-wheel ensure that you treat it with all your love and determination to make it work smoothly!

On the faceplate what we also see is the 2.5 inch diagonally wide ‘plastic’ screen. Yes, a plastic screen, which is a definite turn off. While the iPod’s back is smudge-o-phile, the screen just can’t do without adorning a scratch on it. And how we wish Apple thinks of adding a few more centimeters to the screen’s height!

However, the graphical interface of the iPod Classic is really something to look forward to. The small screen does not deter the player from giving a treat to the eyes with its 320-by-240-pixel resolution. Even the menu looks really cool which is displayed in a split-screen form. The only iPod to feature a split-screen menu, Classic shows menu items in a list on the left half of the screen while the right half shows graphics. For example, glimpses of album artworks for Music, a still from a movie/TV show for the same from the ones saved in the player and so on.

Also, the iPod Classic adopts the Coverflow pattern, apart from Playlist and Albums for browsing through and playing audio files. The Coverflow looks cool in the start but loses it charm and it becomes boring to browse in it with a Clickwheel.

The audio output is satisfying enough, with the frequency response of 20Hz to 20,000Hz. However, if we were to compare iPod Classic with something else, forget the media-players, there are the Sony Ericsson phones too, which give mind-boggling performance. This apparently makes the iPod look like a mediocre device.

Also the EQ in the player doesn’t really leverage the output to an extent where it can be called ‘impressive’. The 3.5-mm stereo headphone jack is a boon for you as you can connect numerous other compatible headphones which you believe can give a better performance. Also, it is a good thing because after a while when the milk white Apple earphones look like they need a bath, you can replace them with other earphones.

The iPod Classic supports audio formats of AAC (16 to 320 Kbps), protected AAC (from iTunes Store), MP3 (16 to 320 Kbps), MP3 VBR, audible (formats 2, 3, and 4), Apple Lossless, AIFF and WAV. iTunes does the work of converting the other file formats so stuffing the files from system to the player isn’t a pain. The new iPod works with new iTunes 8. You can set your own volume limit by setting it.

A newly added feature to the iPod is Genius, which you need to activate via iTunes. Genius is a feature that groups like songs that would go well together, kind of DJing. You can create a playlist of 25 such songs, however, consider yourself to be lucky and someone with a good collection if the Genius doesn’t show you the message “The Genius feature is unavailable for this song”.

The video quality of iPod Classic is remarkable; ditto with its capability of delivering video on TV with the Apple’s AV cable. It is capable of delivering a H.264, 640×480 pixels, at 30fps and it also makes the PMP look too good to be a PMP. For those who do not have the movies or videos in formats that the iPod supports, any video converter with iPod as an option in the formats is your savior. 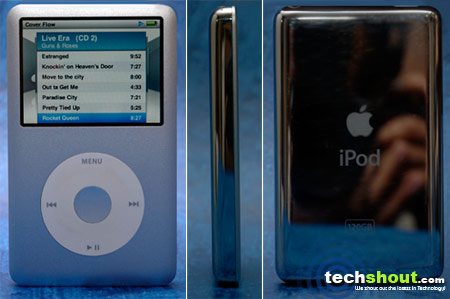 Now for a good performance any device needs a battery life and this is another feature of the iPod Classic 120 GB that managed to bring a grin on our face. The iPod’s battery is has improved as it does give you more than 36 hours of performance for audio playback and at least 7 hours of video playback; a noteworthy performance. Additional features include the extra, podcasts, calendars, contacts, games, notes, alarm clock with which you turn the device into you private bubble.

Here is a quick replay of what Apple has enlisted as the iPod Classic sixth-generation’s features, a massive 120 GB of capacity that helps you save 30,000 songs! (We are still wondering what are we going to do with so much space), colors available are silver and black (yes, no white this time), battery life upto 36 hours for audio playback and 6 hours of video playback (wait, has Apple underestimated it?), USB dock connector (AV cables are sold separately), syncs iPod-viewable photos in JPEG, BMP, GIF, TIFF, PSD (Mac only) and PNG formats, audio support for AAC, protected AAC, MP3 VBR, Apple Lossless, WAV, and AIFF and Audible (formats 2, 3, and 4).

We rate iPod Classic 120 GB a good 8 out of 10 only and only for video output, capacity and battery life.