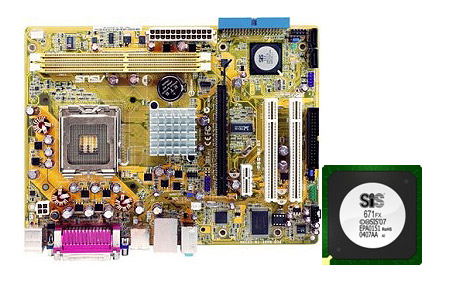 Leading-edge core logic chipset maker, Silicon Integrated Systems (SiS) has announced the general availability of the Asus P5S-MX SE Motherboard with the SiS671FX/SiS968 chipsets. This is the company’s latest product that incorporates the MirageT 3 graphics engine and has been executed in the Asus P5S-MX SE motherboard.

Daniel Chen, CEO and the President of SiS said, “The SiS671FX has received overwhelming responses from worldwide customers. We foresee the great success will keep going and has a fruitful result.”

SiS671FX makes it possible to optimize the performance of the entire computer system thanks to SiS’s proprietary HyperStreamingT technology. It intelligently manages the data streaming to flow easily between the North Bridge and South Bridge, from the peripherals to the core logic chipsets, the front side bus, the memory and the graphic interface. The MirageTM 3 graphics engine is also integrated in the SiS671FX chipset to support 2D and 3D playback. The MirageTM 3 graphics engine smoothes the image quality of the system when playing games or watching DVDs. Besides, the SiS671FX chipset equips one PCI Express x16 slot which enables up to 4GB/s of bandwidth for each direction.