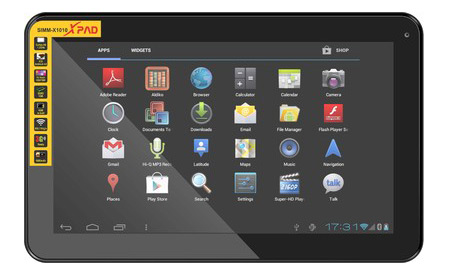 The Simmtronics Xpad X1010 has landed in retail for the tablet market in India, close on the heels of the brand new Wammy Magnus, with its tag marked at a comparably modest price of merely Rs. 8,499. This budget-based device is being sold by a number of e-retailers right now, clubbed with the usual proprietary deals they tend to offer. It is a 10.1-inch Ice Cream Sandwich slate which acts as a successor to the 7 inch X720 that was launched by the Delhi-based electronics manufacturer late last year.

The device comes dressed in a reasonably slim form factor, the dimensions of which read 165mm x 263mm x 10.5mm. It carries on its front a 10.1-inch TFT LCD capacitive touchscreen display capable of throwing its visuals out in a resolution of 1024 x 600 pixels. This multi-touch screen is accompanied on the device’s front by a 0.3MP shooter that potential buyers will be able to employ for video chatting purposes. 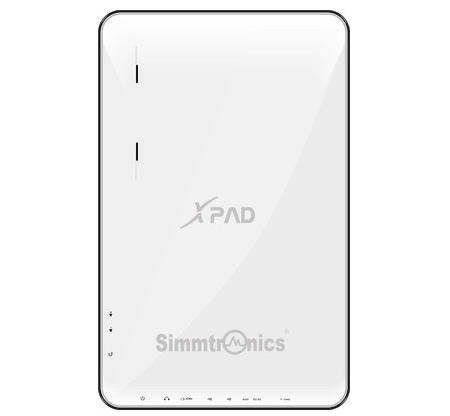 The absence of a rear camera is just another aspect which justifies the slab’s affordable nature. A single core Cortex A8 processor clocked at a speed of 1.2GHz takes care of its operations, along with help from 1GB worth of DDR3 RAM. Moreover, dual Mali-400 graphics can also be found inside it. 8GB of internal storage will be at hand for those who purchase it, but they will even be allowed to expand the slate’s overall memory till up to 32GB by means of its microSD card slot.

The tablet is provided juice by a 5600mAh Lithium-Polymer battery which is capable of offering 6 hours of Internet browsing. On the other hand, if kept on standby, the device is able to keep going for 150 hours. Wi-Fi is of course, included in its offerings, but 3G dongle support is also there for its users to access.

This line of slates was initiated by the company last year, when it launched the X720 in markets such as the Middle East and GCC countries such as Saudi Arabia, Qatar and UAE, before bringing it to its home ground. The 7-inch device can be purchased now at a mere Rs. 3,999. 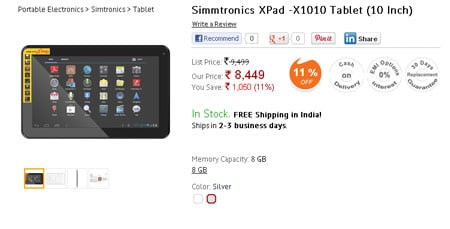 Those wishing to procure the Simmtronics Xpad X1010 however, will need to shell out Rs. 8,499. They can head over to online shopping portals such as Flipkart, Snapdeal and Infibeam to lay claim over the product.