The Simmtronics Xpad Turbo voice calling tablet featuring a pair of SIM card slots has been launched in India, hot on the heels of the Xpad smartphones which went official only a few days ago. The company has not gone on record to confirm the slate as yet and it hasn’t even showed up on the website, but an online retailer has put it up for sale anyway. You are required to shell out Rs 8,056 to lay your hands on the gadget.

This compact device makes the most of the Android Jelly Bean 4.2.2 OS and shows off its intuitive interface through a 7-inch capacitive touchscreen placed on the front panel. The multi-touch display has a resolution of 1024 x 600 pixels. 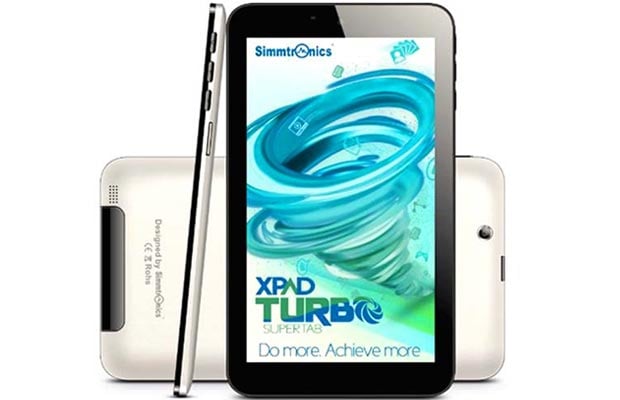 The screen is accompanied by a 0.3MP snapper meant for web conferencing purposes, whereas the 2MP primary camera allows you to capture images as well as videos. A 1.2GHz dual core processor makes the Simmtronics device capable of supporting multiple applications at the same time. 512MB of RAM is also present for assisting the chipset.

Its total internal memory amounts to 4GB that is likely to be insufficient and thus the OEM has provided a memory card slot for increasing it further by up to 32GB using a microSD card. A 2800mAh lithium-ion battery is responsible for keeping the slate charged for an entire day.

The Simmtronics Xpad Turbo is currently available through Snapdeal.