SimCity Creator coming to Nintendo Wii and DS in September 2008 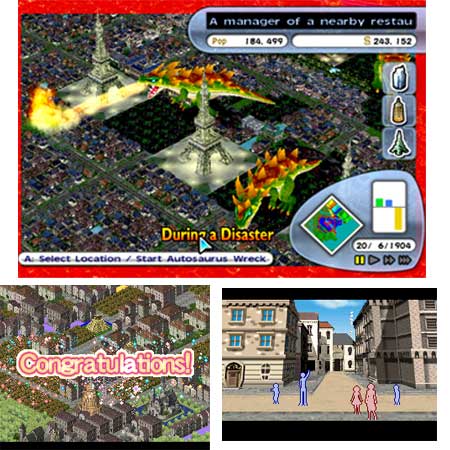 The Sims and Electronic Arts (EA) have announced the first details for SimCity Creator, designed exclusively for the Nintendo Wii and DS.

SimCity Creator lets players be a mayor and allows them to create, enjoy and destroy the city. Players can construct homes, businesses, factories, skyscrapers, freeways, railroads in the city. Also, they can customize their city in many ways including 13 city styles such as American, European and Asian themes. Further Sims and EA have also announced to introduce more city styles later.

Moreover players can select more than 30 “Hero” buildings into your city, so that the city looks beautiful and unique. Some of these building are based on current architecture while some of them belong to history designs. Few fantasy designs are also included in the Hero building list. The more city styles players will explore, the more Hero building options they will have.

Moreover, the SimCity Creator offers the liberty to build transportation systems with free placement of rounded and curved roads and rail lines. This will add new creative and curvy heights to the city. Players can also take a helicopter, a jet or a propeller plane to fly over their own creation.

Using the Wii remote players can create earthquakes, tornados, call in destructive robots and monsters, create fires and discover many more ways to cause havoc. That means they can create and destroy the city too.

“SimCity Creator for the Wii and Nintendo DS brings two separate, delightful new ways to create, enjoy and destroy your own cities,” said Rod Humble, Head of Studio for The Sims Label.

“On the Wii, for the first time in the SimCity franchise, you will have the ability to build curved roads and differently shaped zones allowing you to make more authentic places all utilizing the motions of the Wii remote. Employing the new city advisor system, you will be able to make the game as complex or simple as you want. On Nintendo DS, we will give you the ability to make a city develop through time and to overcome the different challenges each era of urban development presents. I know both long-time and new SimCity players will enjoy these innovative experiences in SimCity Creator starting this September!” Humble added.

SimCity Creator will be available in North America on September 22, 2008, while it will hit the European and Asia-Pacific markets on September 19.