Open Whisper Systems has launched a new iPhone application called Signal which allows users to make and receive encrypted voice calls. There are many apps offering offering similar capabilities and while others will have you shell out a good deal of money, this one is absolutely free.

What’s more, Open Whisper Systems states that its new release is open source which means that the code is accessible by everyone for inspection and can even be improved through contributions. This is a good thing considering that proprietary app makers could include backdoors in their software which is a breach of your privacy. 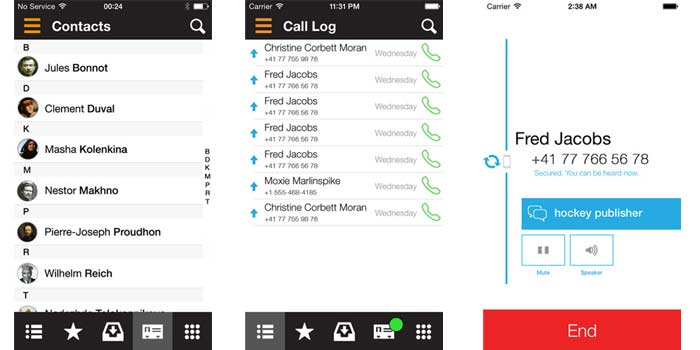 Coming to the capabilities of Signal, it’s quite convenient to use and you won’t need to create a password or register an account. Like popular IM apps, this one uses your existing number and it leverages the ZRTP protocol to ensure secure voice communication. The encryption here is two-way and calls can only be placed to others that have the app installed.

Also see: Bolt is Instagram’s answer to Snapchat and it’s out now… but in select countries

Additionally, you’ll also be able to securely connect with others running the RedPhone app on Android which is a similar product from Open Whisper Systems. The developer has also announced that it plans to incorporate the same encryption for text communication later this summer, which will be compatible with its TextSecure application for Android.

The new app (download here) is exclusive to the iPhone for now, but the developer has announced that the two aforementioned tools for Google’s mobile OS will be combined into a single utility under the Signal name in the near future. A Google Voice-like Chrome extension is also in the works combining the above capabilities for use on a PC.