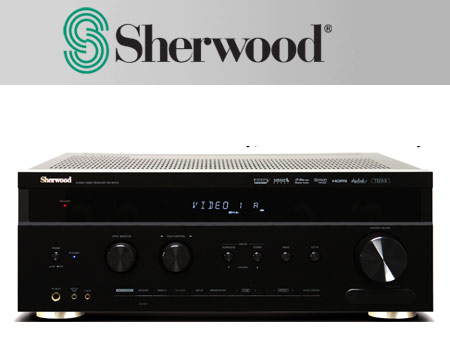 Sherwood it appears was on a roll last week and introduced a series of innovative products. Here are two more Sherwood creations that caught our attention. Recently the company unfurled a new Blu-ray player dubbed as BDP-5004 and a new high-performance A/V receiver called as RD-8504.

The Sherwood BDP-5004 Blu-ray player takes video and audio performance to elevated heights, allowing users to use the Blu-ray format to the best of its abilities. This Profile 2.0 player encompasses BD-Live capability and also allows playback of Blu-ray discs at 1080i, 1080p60 and 1080p24. Scale standard DVDs to 720p, 1080i, or 1080p can also be played through its HDMI 1.3 output. The player supports DVD, VCD, DVD ±R/RW, CD-R/RW, CD, MP3, MP3-CD, most popular codecs including WMA, MPEG 1, 2 and 4, VC-1, h.264, DivX and JPEG playback formats. Users can enjoy media playback via a front panel USB host input.

Supporting both Deep Color and XV Color, the player offers onboard decoding for Dolby TrueHD and DTS HD Master Audio high-resolution audio formats. It is enabled for Dolby Digital and Dolby Digital Plus. The player features component and composite outputs, additional audio outputs including a coaxial digital output and a 2-channel analog down mix output and 5.1 channel analog outputs. With 192 KHz/24-bit digital to analog converters, the player claims to ensure superb audio quality on the analog outputs.

“With today’s advanced audio and video delivery systems centered on the format, we believe that Blu-ray players are an important category for Sherwood, building on our 50+ year legacy of audio excellence,” shared Jeffrey Hipps, Sherwood’s Sr. VP for Marketing and Product Development. “Both of these new components are capable of delivering the best of the format at a remarkably affordable cost.”

As for the Sherwood RD-8504 receiver, it claims to distinctly combine superior audio and video performance with its wide range of features. Offering Dolby and DTS lossless Blu-ray audio, the receiver has the ability to convert any video to 1080p courtesy its HDMI output. It includes three HDMI 1.3 repeater inputs and offers 100 watts RMS for each of its seven channels. It does all this at less than 0.2% THD via completely discrete amplifiers.

The receiver is further equipped with Anchor Bay Technologies’ ABT2010 video processing chip. The receiver also handles DTS 96/24, ES, and Neo6; Dolby Pro Logic IIx, as well as SACD and DVD-A and sports an additional eight DSP surround modes. Incorporated with three HDMI 1.3 inputs that have repeater circuitry, the receiver reveals to receive and process HDMI audio from the source component. This should rule out the requirement of separate audio cables from the source component to the receiver. There’s also a single HDMI output on board.