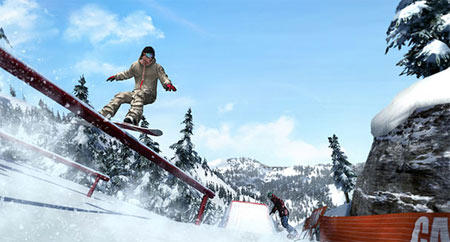 Ubisoft has announced the development of the Shaun White Snowboarding game which will appear on the Xbox 360, PlayStation 3 and Nintendo Wii. Also, the Windows-based PC version of the game is scheduled to be available in Holiday 2008. The new game is targeted at sports loving gamers.

Powered by the award-winning Assassin’s Creed engine for the Xbox 360 and the PlayStation 3 system, Shaun White Snowboarding captures the action sports lifestyle. Wii owners can pair the game with the Wii Balance Board. The Nintendo Wii Shaun White features its own unique storyline and adventures.

“Shaun White Snowboarding will turn all of the traditional ideas and experiences of past action sports titles upside down,” said Tony Key, senior vice president of sales and marketing at Ubisoft. “The combination of Ubisoft’s innovation approach and the influence of Shaun’s lifestyle and perspective make this gaming experience like no other.”

The gamers can trek and find their own way to the bottom in a free-form, open-mountain environment. Players will also be offered various customizable options ranging from tricks to avatars and riding styles.

Also, fun activities such as throwing snowballs, hiking to access secret spots and filming your friends doing ripping tricks are included in the game. Players can also share their videos by uploading them.

The Wii edition of the Shaun White Snowboarding game will boast exclusive features and an exclusive storyline. Shaun White, Olympic Gold Medalist, will act as a good-natured friend and mentor to the player, hooking him up with the right friends to conquer challenges together, introduce him to new locales, or simply be around to share in a laugh.

The price and the availability date are yet to be announced.