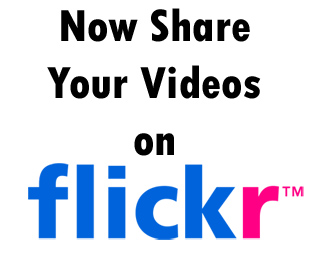 Online photo sharing community Flickr, has announced the introduction of a video sharing feature. Flickr pro members can now upload personal video clips and share them with friends, family and the world through this photo sharing website.

This new feature of uploading videos will support video clips of up to 90 seconds. Moreover Flickr subscribers can organize and share videos just the way they do it for photos.

Besides, Video on Flickr will be available in eight languages including English, French, German, Italian, Korean, Portuguese, Spanish and traditional Chinese.

“Video on Flickr is an extension of what Flickr is already doing with more than 2 billion photos worldwide – providing a place where people capture and share life’s daily moments,” said Kakul Srivastava, general manager of Flickr at Yahoo.

“Digital media has led to a new behavior emerging in the market and people are much more likely to shoot short video clips, essentially “long photos,” with their digital still cameras and mobile phones. There is a great resonance between this new category of content and with the kind of authentic, personal moments already being shared on Flickr,” Srivastava added.