Google and Motorola’s Nexus 6 phablet is in the eye of the storm once again, even as several reports of connection failures have suddenly started popping up about it. Users of this device are experiencing grave problems getting their mobile data connections to stay active continuously.

By what is being seen right now on the internet, this Nexus 6 issue is relevant for multiple software versions and across different carriers and locations. This goes on to indicate that Google has a serious problem on its hand, as the issue is most definitely being caused by a software bug.

According to reports, the random errors start when the 3G or LTE data connection on the Nexus 6 fails and displays an exclamation mark on the top signal bar. A simple reboot resolves the problem, but only for some time, as the Google handset starts displaying the same exclamation mark again, rendering its internet connecting ability useless. 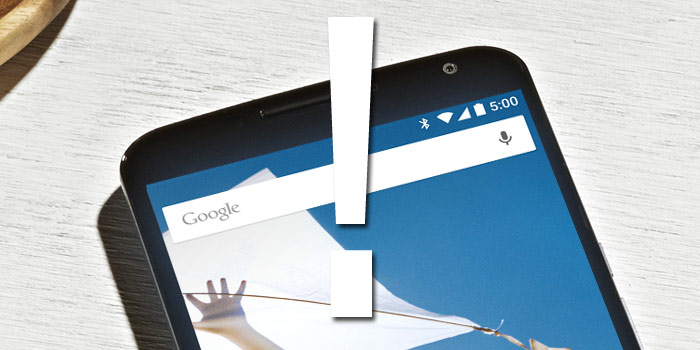 As has been reported by Android Police, discussions about the matter have been heating up on forums like XDA and Reddit over the past few days. While people with different carriers as well as locations are reporting the connection issue, it has also been noticed that variants of both Android 5.0 and 5.1 are involved in the mess.

Here’s a neat look at the specs of the Nexus 6:

A solid fix isn’t out yet; so frequent rebooting is the only solution as of now. It was only last week that another scary news about the Nexus 6 had popped up. A user from India reported that her handset’s battery exploded suddenly when it was on standby.

Google is yet to officially respond to the connection issues on the Nexus 6. Let us now wait and find out what its next step will be.