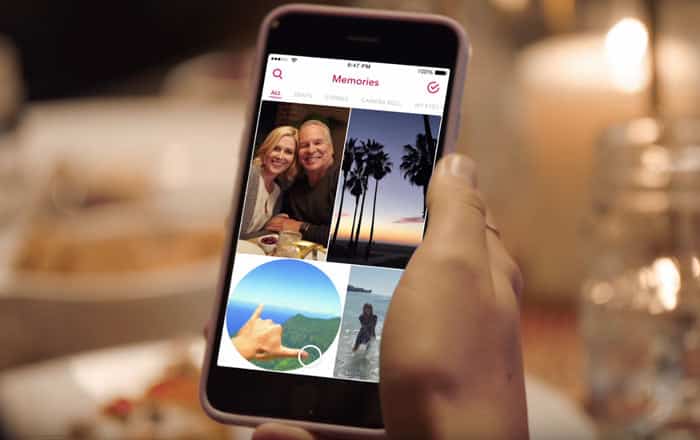 Snapchat is everyone’s app of choice when it comes to sharing photos in real-time between friends, with the main appeal being the temporary nature of the shots. This is about to change in a major way thanks to the introduction of a new personal archive section dubbed Memories.

Memories represents the biggest shift in Snapchat’s strategy since the app first hit the scene. Users can now save their images and Stories within the app itself instead of letting them self-destruct. It’ll be interesting to see how consumers react to the new system. Initial feedback seems to be positive so far, so it might just prove to be a success for the company.

Memories can be accessed by swiping up from below the Camera screen. Photos and videos stored within the section can be edited, organized, and shared with friends. Users can even insert old photos into new Stories. If they do so, Snapchat will place a frame around the picture so their friends can see it’s from the past.

Finding a particular picture could be a daunting task for heavy-duty Snapchat users, which is why the brand is making it easy to find a Snap or Story. All a person has to do is type in a keyword like dog or Hawaii and the app is supposed to automatically locate what they’re looking for with the help of a new object recognition feature which has been built into Search.

Snapchat is also adding a brand new My Eyes Only option which lets users keep personal photos and stories shielded from the world. It’s password-protected via a PIN, so no one can see those snaps unless the user allows it. The company thinks of it as a way to show a person’s Memories to a friend when they’re hanging out together without the latter seeing any awkward images.

Snapchat is set to roll out Memories gradually over the course of the next month for both iOS and Android.