See through walls with radio waves 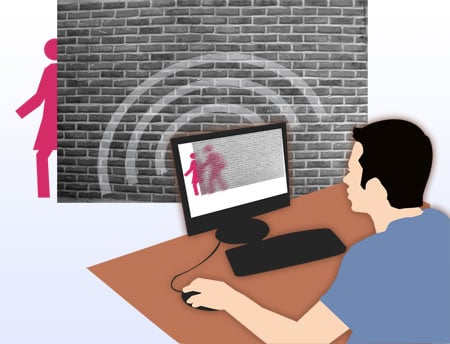 As a child, we may remember hiding behind a wall, be it from parents, siblings, friends or teachers. However, these days it has a flip side pertaining to people involved in malicious activities.

Engineers of the University of Utah have revealed that wireless network of radio transmitters can track humans moving behind solid walls. This system would lend a great help to fire fighters and police to nab intruders and also to rescue hostages, fire victims, and more. The researchers- Patwari, an assistant professor and Wilson, a doctoral student are in the University’s Department of Electrical and Computer Engineering.

“By showing the locations of people within a building during hostage situations, fires or other emergencies, radio tomography can help law enforcement and emergency responders to know where they should focus their attention,” Joey Wilson and Neal Patwari wrote in one of two new studies of the method.

The method proposed by the researchers use radio tomographic imaging (RTI). This enables viewing, locating as well as tracking people/objects that are surrounded by radio transceivers which send and receive signals. All this negates the need for radio-transmitting ID tags. A study outlining the method and testing it in an indoor atrium and a grassy area with trees will soon be published in a journal of the Institute of Electrical and Electronics Engineers.

The study included a wireless network of 28 inexpensive radio transceivers (nodes) placed around a square portion of the atrium alongside a similar portion of the lawn. The square in the atrium was about 14 feet long with eight nodes spaced 2 feet apart. While the square on the lawn with 21 feet side features nodes placed 3 feet apart. The transceivers were placed on 4-foot-tall stands. By measuring the radio signals between all nodes as a person walked in each area, the processed radio signal strength data were displayed on a computer screen forming a bird’s-eye-view, blob-like image of the person.

Patwari says the system still needs improvements, “but the plan is that when there is a hostage situation, for example, or some kind of event that makes it dangerous for police or firefighters to enter a building, then instead of entering the building first, they would throw dozens of these radios around the building and immediately they would be able to see a computer image showing where people are moving inside the building.”

Another study offered an improved method which allowed tracking through walls. The study showed that variations in radio signal strength within a wireless network of 34 nodes enables tracking of moving people behind brick walls. The wireless system wasn’t a Wi-Fi network rather researchers used the Zigbee network.

Measuring the radio signal strengths from all the transceivers (with and without a moving object) in their indoor, outdoor and through-the wall experiments, Patwari and Wilson developed math formulas to convert weaker or attenuated signals while an object moves into signals into a blob-like, bird’s-eye-view image. The Radio tomographic imaging (RTI) is less expensive compared to radars and measures shadows in radio waves rather than echoes or reflections calculated in radar.

The radio frequency signals can travel through walls, trees and smoke and other obstacles. On the other hand, optical and infrared imaging systems do not possess this ability. The researchers talk about various benefits that the system will offer in marketing as well as to elderly people. Keeping in mind the past incidents, it may prove to be a great technology to safeguard against hazardous elements.