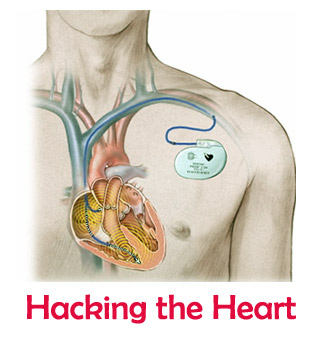 If you thought that hacking is only limited to computers and gizmos, then think again.

A startling new study concludes that a patient’s information can be attained by hacking the implanted devices. This revelation was made by computer scientists from the Beth Israel Deaconess Medical Center, Harvard Medical School, the University of Massachusetts Amherst, and the University of Washington.

An implantable cardioverter defibrillator (ICD) which includes pacemaker technology, can keep a record of heart activity, transmit information to a bedside station and adjust health workers to any dangerous or unusual activity.

At the time of the testing phase, the research group could make a Medtronic device release sensitive patient information off its computer chip. With the help of a low-cost equipment, experts could make the device operate incorrectly and also run its battery down.

According to Dr.William Maisel of the Beth Israel Deaconess Medical Center and Harvard Medical School said, “I think patients with implantable defibrillators should not be worried by this. I think we would be doing them a disservice if this upsets them. There has never been a documented malicious attack on someone’s implantable cardiac defibrillator.”

When the experts contacted the U.S. Food and Drug Administration, it admitted that a hacker could make use of specially developed software and a handheld antenna to send out data from a defibrillator through the airwaves. However the federal agency also noted that the chance of a hacker interrupting or maliciously reprogramming a defibrillator was remote.

The most important question that the above mentioned study raises is that how secured is a patient’s privacy that is guarded by HIPPA and other federal regulations, and emphasizes the need to guarantee effective data loss prevention practices.