Motorola is still to officially speak about the second-gen Moto 360 smartwatch, but various leaks have given us reason to believe that it will be made available in the form of 2 sizes. As if reaffirming that claim, a new image of these two sizes has seeped out into the open.

Above all else, it gives us a clear idea of how different the sizes of these two Moto 360 devices are, as they are both worn on the same wrist. Motorola had faced some criticism with its first-gen smartwatch, since it was considerably bigger for people with small wrists.

It’s perhaps to address this that the Lenovo-owned firm has decided to take this route this time around. Competition from the Apple Watch could also be one of reasons for this decision having been taken by Motorola. Apple’s devices are being offered in the form of 38mm and 42mm size options. 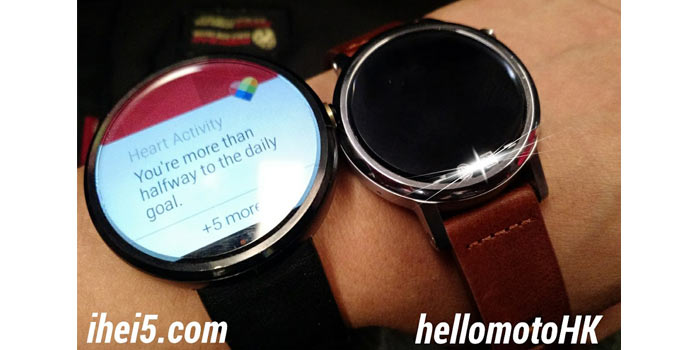 The second-gen smartwatch could bear the names Moto 360L and Moto 360S for its large and small variants, respectively. The image we’ve posted above comes from a Google+ page named hellomotoHK which does not reveal any additional information about the device.

As you can see, the smartwatch will not only retain its circular design, but also its flat tire display. In case you’re wondering what that means, you should take note of the fact that the Moto 360’s display is not completely circular like that of the LG G Watch R, as there’s a slight cutout at the bottom for fitting the ambient light sensor.

There’s no word on when the second-gen Moto 360 variants will actually be unveiled by Motorola. We’ll have more on them when additional details are out.