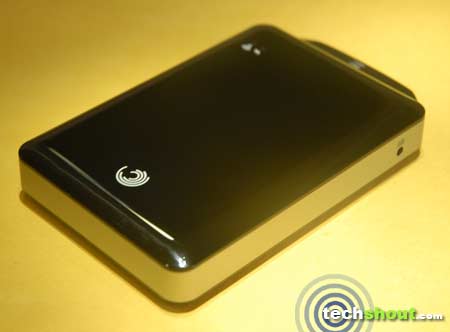 The Seagate GoFlex Satellite that we’ve picked up for review may appear like any other external HDD, but looks can be deceiving at times. And that’s what seems to be the case here. Just as its name suggests, this piece of hardware acts as a wireless storage medium for accessing data. And here’s the best part. It’s compatible with various types of portable devices including the iPad, iPhone and Android-powered gadgets as well as laptops. For Google’s mobile platform and Apple’s iOS, the Ireland-based drive manufacturer has made available specific applications for accessing content from the HDD, whereas notebook users will have to depend on their web browsers for carrying out streaming operations. Although it does sound good, let’s not get ahead of ourselves here. Just like any other external drive, we’re going to put this one to the test as well.

Normally, we wouldn’t expect anything out of the ordinary when unboxing external HDDs. An appropriate cable and the main device are all we need to get started. But then again, the Seagate GoFlex Satellite isn’t like any everyday piece of hardware. Enclosed within a hard plastic casing, we extracted the wireless storage device along with a number of assortments such as a USB 3.0 USM adapter that’s accompanied by a detachable USB 3.0 cable, a wall adapter, a variety of pins for different sockets, a USB to DC cable and a quick start guide. 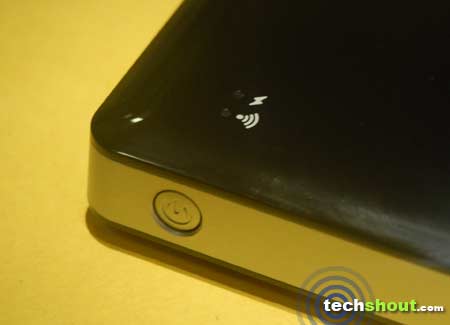 As we’ve already pointed out, the Seagate GoFlex Satellite looks no different from a few other portable storage drives, rolled out by this manufacturer. Take the Seagate FreeAgent GoFlex, for instance. Built around dimensions of 120mm x 90mm x 22mm, this device flaunts a sturdy form factor. And the company has also sprayed it with a premium, smudge-friendly glossy finish on the upper surface. Component-wise, there isn’t much embedded into this portable streamer. On the top are two LED indicators that light up when the drive is active and when the wireless network connection is online. Each indicator has specific illumination options for different states, too. So if the battery is below 20%, the power indicator goes red. 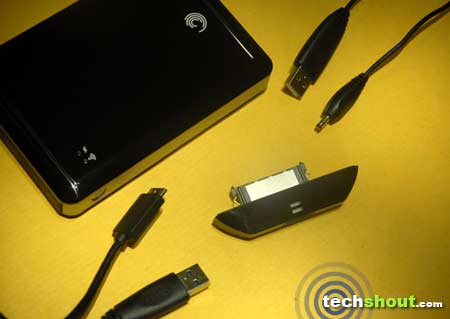 Whilst moving along its edges, we ran into the power button and a compartment that houses the USM Connector or the removable GoFlex USB 3.0/2.0 adapter for loading content from a PC or Mac. We also had a quick run through the specifications sheet to get a better idea of what we’re dealing with. The company has employed its own Seagate G-Force Protection Freefall Sensor technology that puts the internal drive into a non-operational state during the event of a drop, in order to protect data. When it comes to hoarding content onto the drive, the GoFlex Satellite can be loaded with all file formats that are supported and playable on laptops, tablets and smartphones. At present, the company only has a 500GB offering up its sleeve. The Li-ion battery enclosed within this piece of hardware is non-replaceable. Well, that shouldn’t be a problem as it supposedly offers 25 hours of standby and around 5 hours of continuous content streaming to a single device on a single charge. 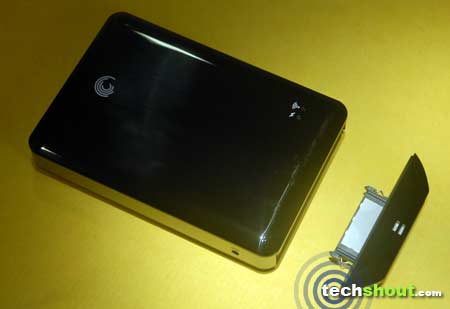 As we’ve already mentioned, the Seagate GoFlex Satellite comes with 500GB of storage. And that’s pretty much enough for hoarding large amounts of data, including entire movies in full HD resolution. Since it’s similar to any other external HDD, transferring content wasn’t going to be a problem. All we had to do was plug it into a USB port, wait for the drivers to automatically install and start copying. Since we used the 3.0 interface, it barely took us awhile to load up stuff. And with a push of the button, network connectivity was established in a matter of seconds. 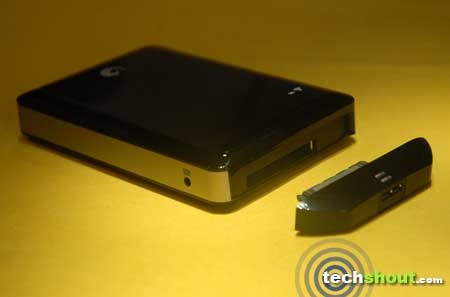 When it comes down to accessing content, this manufacturer has made available dedicated apps for iOS and Android platforms. Both applications are similar in design and features, but lack the much needed options and functions for music playback, including the ability to view tracks in different categorized views and even set a custom EQ for listening pleasures. From viewing high quality movies to flipping through images and other content, everything worked out smoothly with us. Also, options to shut down the device or restart it along with settings pertaining to security, network as well as various other functions, are adjustable through the mobile application itself. A few advanced options allowed us to delete and even download files remotely. Now these are all swell, but what about uploading? The ability to backup contents from portable devices would have really heightened its advantages. Well, it’s nothing the company can’t add in, over the course of time.

Setting up the drive was really simple, and so was transferring media files and documents over USB.

Wireless connectivity gets established in a matter of seconds and WPA security encryption helps protect data and prevent unauthorized use.

The GoFlex Satellite possesses a lightweight form factor that makes it really convenient to carry around.

Streaming content is a piece of cake. Even 1080p full HD video buffered in a matter of seconds, on the iPad.

The mobile app could use a bunch of features such as category views for the Music player, EQ settings and the ability to upload content straight from portable devices as well as a many such options that will certainly enrich the overall experience.

A slimmer form factor would play well here as carrying the GoFlex Satellite around in your pocket isn’t likely to happen.

Files weighing over 500MB in size, failed to download through the iOS and Android application, at least on the first few tries.

When connected to the drive’s Wi-Fi network, it wasn’t possible to browse the internet on another wireless option.

The Seagate GoFlex Satellite positions itself as an all in one storage solution. We used it as a portable HDD for backing up data as well as transferring stuff between PCs and at the same time, had all our content stream-ready at any given time. It’s definitely worth the $199.99 price tag, if you were to ask us. This piece of hardware managed to set a really good impression and left us quite content with everything it had to offer. So just for that, and by taking all the aforesaid pros and cons into account, we’re giving it an 8.3 out of 10 rating.