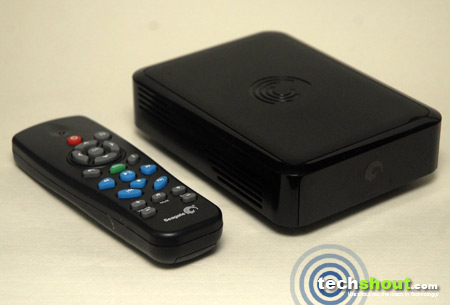 Sooner or later, the thought strikes every compulsive hoarder who has more portable HDDs and USB flash drives than they can count on their fingers and toes put together. That moment could come when they buy a new widescreen LCD or when the PC monitor refuses to come alive. We’re talking about the need for a media player which can stream content stored on all sorts of storage devices to a TV screen. After having their feet grounded in the storage sector for a long time, Seagate decided that they’d help customers do more with their external HDDs. And thus came forth the company’s media players christened FreeAgent Theater+ HD and FreeAgent GoFlex TV HD. Here’s what followed when we took the Seagate FreeAgent GoFlex TV HD media player for a spin in our review labs.

We tore open the packaging to find the media player nestled quite cozily between a warranty booklet, power supply unit, Quick Start guide, software CD-ROM, a remote control with two AAA sized batteries and a couple of cables. The last mentioned are meant for hooking up the device to a TV’s composite or component A/V terminals. For directing entertainment content through an HDMI cable, you’ll have to go out and get one yourself. The GoFlex TV looks nothing like the FreeAgent Theater+ and the only thing they share in terms of design is the entirely black theme and Seagate markings. The connectivity options dotting the sides include a pair of USB 2.0 ports and terminals for optical S/PDIF, Ethernet, HDMI 1.3 as well as composite and component video output.

The Seagate FreeAgent GoFlex TV HD is nothing to ogle at in terms of the exterior design. It’s entirely black with the Seagate logo cut into the top and features vents along two sides and the base which are presumably meant for keeping down the temperature. We took some time to notice the self-effacing reset button sharing a side with one of the USB ports we mentioned earlier. This exoskeleton of a gadget raises itself off the ground very slightly on legs which may be best described as four little bumps. A flap hides an enclave for entombing any compatible GoFlex portable HDD which connects to the media via an embedded drive slot. The accompanying remote is of the lightweight type with 21 buttons colored in grey, red, green or blue.

Of course, you can always choose to command the device with the Seagate TV Remote app for iPhone, iPod touch or iPad which is available in the iTunes App Store for free. The physical remote and the app share a very similar button layout, with the latter’s being a little more scrunched up to fit the concerned touchscreen neatly. But unless you’ve misplaced the supplied remote, there’s really no need to go through the hassle of downloading the app for your ‘iDevice’. At the same time, we do agree that those considering their portable Apple gizmos to be megalomaniacs who like to control everything may think otherwise. 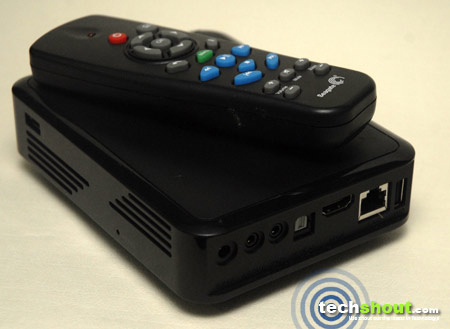 Five widgets at the top let you access movies, photos, music, the internet or simply browse through stuff. The line of widgets in the middle of the interface provide access to online sites like YouTube and Flickr, while those placed below this opens up the portal to connected devices. Though the gadget may have its private reasons for freezing up while displaying still photos, we don’t like the fact that it did this every time we tried to embarrass our colleagues by playing out their baby pictures on the widescreen in our office. We’re talking about regular JPEG pictures here that were less than 15MB when the Seagate site clearly advertises the media player’s ability to handle up to 20MB JPEG files. Other content like music and videos play out in the predictable manner provided they’re in the aforementioned formats, while the gadget draws power continuously from a wall outlet. It would have been nice if we didn’t have such a mess of wires though.

The Seagate FreeAgent GoFlex TV HD seems to cover a lot of files types for video viewing and listening to music. It’s good for most content you may have stowed away in that portable storage device.

We barely needed any time to get friendly with the UI which is extremely simple to understand.

The support for online streaming of content is a very nice touch.

We wish folks at Seagate had found a way to incorporate Wi-Fi connectivity instead of asking us to shell out $39.99 for a Wi-Fi adapter.

The media player froze up on us when we tried to playback JPEG images through it.

The Seagate FreeAgent GoFlex TV HD is a media player which packs in a range of useful connectivity options. Setting it up requires a bare minimum amount of genius and exercise. We can’t tell you if the over Rs. 8,750 pricing is perfect since people’s opinions vary drastically on this front when it comes to any gadget. But the player is a good one for hoarders who prefer that their devices offer online streaming convenience. We’re giving it an 8.9 out of 10 rating.