Seagate and McAfee self encrypted drive for notebook computers announced 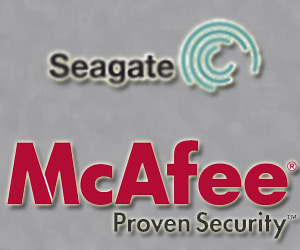 Seagate in collaboration with McAfee have announced the shipment of self-encrypted hard drives for the notebook PC. The novel 500GB and 320GB hard drives with integrated encryption will have Dell as their first OEM customers.

With software from McAfee for the enterprise wide management of laptops having Seagate security, the new drives will help users fight the loss or theft of mobile information. Released in both 5400 rpm and 7200 rpm models, the novel Momentus full disk encryption (FDE) laptop drives by Seagate have a storage capacity of up to 512GB.

The Seagate McAfee drives comprising of complete hardware encryption will also have the 128-bit AES encryption and a fast Serial ATA interface. With no requirements of replacing the encryption software in case the security software is modified, the encryption feature will ensure users of no performance overhead. Also the drives have been National Security Association (NSA) certified and can easily be swapped into existing notebooks.

She additionally remarked, “So for small businesses, if they know that encrypted hard drives are faster than software encryption and they offer security, there’s no need to go out and purchase a new laptop. They can just replace the hard drive.”

While Dell is the first OEM to confirm the use of the 7,200-rpm Momentus drives to its new E-family of Latitude notebooks, Seagate has also announced the availability of the drives via PC OEMs, custom system builders and distributors for those who looking for new notebooks.