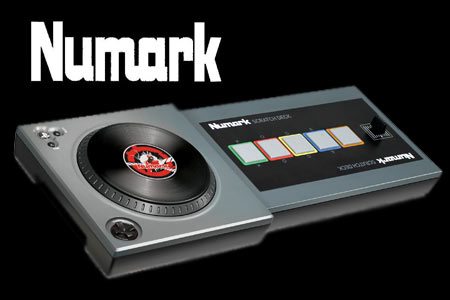 Gamers can now play like professional DJs with the latest control from Numark Industries and Genius. The two companies have come together to reveal Scratch Deck for the Scratch: The Ultimate DJ game. This game and controller can be used with the Xbox 360 and PS3 consoles.

Scratch Deck comprises of a touch-sensitive, free-spinning turntable complete with a crossfader and 5 Akai Pro MPC-style drum pads. These features are the two key elements of the hip-hop and DJ experience. Gamers can add their own unique style and change the tracks in real time with the turntable. They can also perform and personalize songs by activating samples using these pads. This method is an essential part of hip-hop beat production.

Adam Cohen, Director of Business Development, Numark remarked, “For decades, Numark has been developing turntables, DJ mixers and digital DJ controllers. We know what professional DJs demand, and we used that knowledge to produce Scratch Deck. It was critical that we deliver an authentic DJ experience to gamers, whether they be experienced DJs or players who have never put a needle to vinyl.”

Gamers can record and upload their own compilation by utilizing a compatible USB microphone. They can also pre-load their samples into the game by using 60 different battle records that come along with the software.

Besides comprising of the above various features, the controller also includes normal controls for music rhythm games. The Scratch Deck has a realistic appearance complete with a surface that resembles a vinyl record. Even the crossfader and drum pads produce a realistic music experience. The controller for the DJ game can be played by both right-handed as well as left-handed gamers as it possesses both the configurations.

Scratch: The Ultimate DJ provides players with excellent rhythm gameplay and allows them to carry out free-form DJ tricks. The game incorporates tracks from some of the most famous names in the hip-hop music scene. Besides, the game scenario is set in urban environments.

Scratch: The Ultimate DJ game with the Scratch Deck controller will be out in stores this autumn. The price is however not known. Enthusiastic players can get first hand experience of the device on June 3, 2009 at an exclusive event being held in Los Angeles during the week of the 2009 Electronic Entertainment Expo.