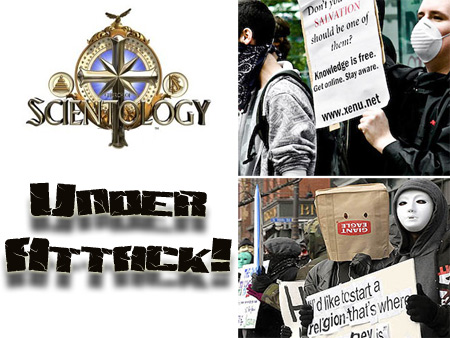 In last week of January 2008, we had reported about the Church of Scientology getting bombarded in an online attack launched by the “Anonymous” group of hackers. Now, this fight that took place in cyberspace took to the streets of Edmonton, US just outside the Church itself. In fact, we think that a new cult may be on the rise- the Anti-scientologists!

Around 50 masked protesters gathered here for a demonstration against the Church’s policies. Tom Cruise will surely have no reason to jump on the couch anymore, that’s for sure.

The participants in this protest donned Guy Fawkes masks and some of them even wore face coverings made form their T-shirts. The group assembled at 11.00 a.m. to stage the protest holding placards, handing out pamphlets and encouraging passersby to lend their support.

One of the protesters who refused to divulge his name said, “Our goal here today is to bring awareness to people about the Church because they’re very secretive and go to great lengths to hide their secrets. There is no active joining of Anonymous.”

Chants of “Church on the right, cult on the left,” “Religion is free” and “We want Xenu”, could be heard emanating form eth group of anonymous protesters.

Further, the Scientology protesters offered a list of complaints against the Church of Scientology some of which include their orthodox views on medicine, psychology and the cult mentality that the group followed.

Apparently, almost every protester who was interviewed said that they did not know anyone else at the event, or know who was leading the group for that matter. Well, the group is not called “Anonymous” for nothing!

According to the Boston police, no arrests were made in connection with this protest.