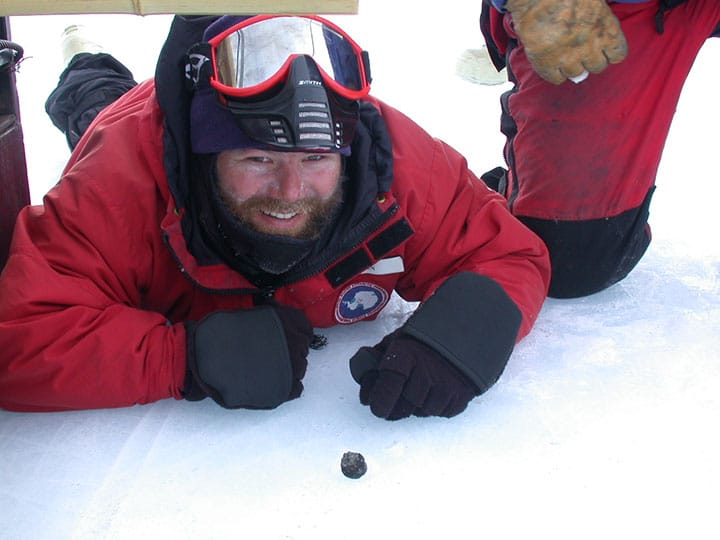 A space rock the size of a golf ball contains microscopic clues that could offer a peek into the evolution of life’s building blocks on Earth, NASA scientists have said.

The rock, now known as meteorite Asuka 12236, was picked by a team of Japanese and Belgian researchers during a 2012 expedition to Antarctica.

As it turns out, Asuka 12236 is one of the best-preserved meteorites of its kind ever discovered.

In a study published in the journal Meteoritics and Planetary Science, scientists reported the concentrations, relative distributions, and enantiomeric ratios of amino acids in water extracts of the meteorite.

Led by astrobiologist Daniel Glavin at NASA’s Goddard Space Flight Center in Greenbelt, Maryland, the team found more left-handed molecules than right-handed ones in some protein-building amino acids in Asuka 12236.

These left-handed molecules would have needed to be processed in a lot more water than this ancient rock seems to have been exposed to.

“It is pretty unusual to have these large left-handed excesses in primitive meteorites,” Glavin said.

“How they formed is a mystery. That’s why it’s good to look at a variety of meteorites, so we can build a timeline of how these organics evolve over time and the different alteration scenarios.”

On the timeline of the solar system, Asuka 12236 fits in toward the very beginning — in fact, some scientists think that tiny pieces of the meteorite predate the solar system.

Several lines of evidence suggest that Asuka 12236’s original chemical makeup is the best preserved in a category of carbon-rich meteorites known as CM chondrites.

These are among the most interesting rocks to study for scientists who focus on the origin of life since many contain a highly complex mixture of organic compounds associated with living things.

Scientists have determined the interior of Asuka 12236 is so well-preserved because the rock was exposed to very little liquid water or heat, both when it was still a part of an asteroid and later, when it sat in Antarctica waiting to be discovered.