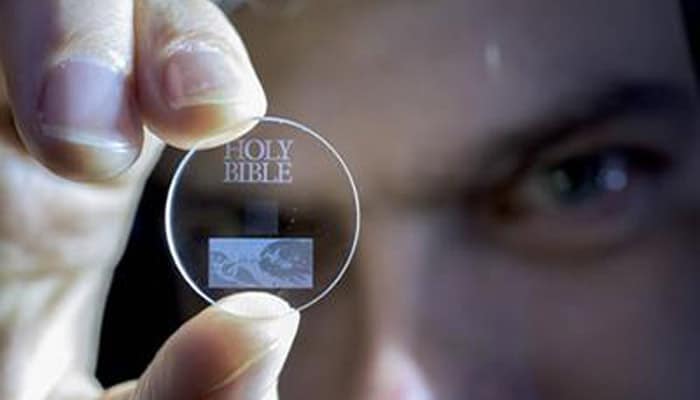 Digital storage has just taken a massive step forward into the future with the invention of an entirely new way of preserving information. Scientists have created a tiny glass disk which can hold a staggering 360TB of data and last for billions of years even under extreme conditions.

This affectionately nicknamed ‘Superman memory crystal’ records information in 5 dimensions using ultrafast lasers. It was created by scientists at the University of Southampton’s Optoelectronics Research Center (ORC), who made it out of nanostructured glass. The material changes the way light travels through the layers, effectively polarizing it.

To read the data, one will have to be in possession of an optical microscope and a polarizer, similar to how Polaroid sunglasses work. So far, the researchers have utilized it to store important documents like the Magna Carta, Newton’s Opticks, the Kings James Bible and the Universal Declaration of Human Rights (UDHR).

These will now be around for the next 13.8 billion years if kept at 190°C. Even a major calamity which somehow raises temperatures to 1000°C won’t be able to destroy it. It’s more or less an eternal form of archiving, with the scientists claiming it can survive forever at room temperature. This property makes it ideal for institutions like museums and libraries.

As Professor Peter Kazansky from the ORC puts it, the technology can secure the last evidence of civilization and make sure it’s not forgotten. The potential of the glass disk was first demonstrated 3 years ago when 300KB of text was inscribed in 5D. It’s come a long way since then and could have huge ramifications in the development of portable memory.

The team behind it is now seeking industry partners to further grow and commercialize the invention.