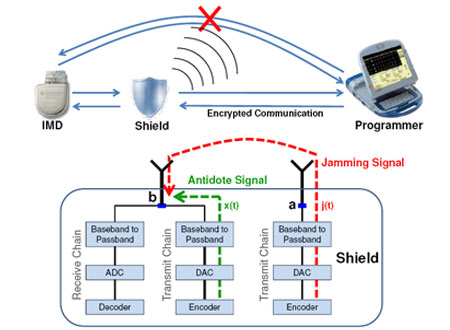 Not many may have thought of how Implantable Medical Devices (IMD) can function as a devious method of assassination. We know we haven’t. MIT and University of Massachusetts-Amherst (UMass) researchers have knocked together a system which can solve the problem of medical implants being vulnerable to attacks.

IMD involving pacemakers, defibrillators, brain stimulators, drug pumps or similar gadgets employ wireless connections. It enables doctors to monitor patients’ vital signs or revise treatment programs. This also means that someone with malicious intentions could kill a person using such a device by directing it to deliver lethal doses of medication or electricity.

“It’s hard to put encryption on these devices,” stated Dina Katabi, an associate professor in MIT’s Department of Electrical Engineering and Computer Science. “There are many of these devices that are really small, so for power reasons, for form-factor reasons, it might not make sense to put the encryption on them. Think of the jamming signal that we are creating as a secret key. Everyone who doesn’t know the secret key just sees a garbage signal.”

The MIT and UMass solution adopts a second transmitter to jam unauthorized signals in an IMD’s operating frequency and permit only authorized users to communicate with it. Since the jamming transmitter deals with encryption and authentication, the system is expected to be compatible with existing implants which aren’t really designed with hostile attacks in mind.

The transmitter in question, also dubbed a shield, is petite enough to be worn as a watch or necklace. It can concurrently send and receive signals in the same frequency band. Two antennas and reworked signal processing are the main props behind the curtains. Of course, there have been no documented cases of the envisioned attacks so far. At the same time, the Federal Communications Commission recently moved IMD to another frequency band which permits wider ranges of wireless communications.

The MIT and UMass researchers who’re part of this project will present the jamming transmitter solution at the Association for Computing Machinery’s forthcoming Sigcomm conference.