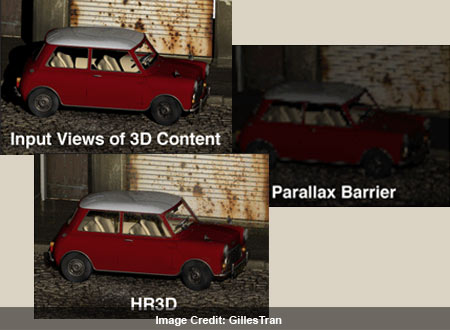 Ditching the regular 3D glasses for chic designer ones is obviously not everybody’s cup of tea. The Nintendo 3DS may have brought new hope to those who dislike awkward eye-wear, though this next tidbit makes 3D sound even more promising. The guys at MIT Media Lab have revealed HR3D, a fresh approach to 3D without the shades.

The technology is capable of expanding the viewing angle of a 3D display that renders it practical for larger devices as well as maintaining the 3D effect in cases where the screen is rotated. Apparently, the battery life of gadgets like the 3DS can also be extended by almost 50% without the brightness or resolution being affected courtesy of this technique.

The Nintendo gaming unit employs the parallax barrier to deliver 3D. Its screen comprises a pair of parallel LCDs positioned a bit apart. When being used in 3D mode, the display on the front throws up a series of opaque vertical stripes, requiring the backlight to be twice as bright and thus exhausting the battery life easily. Moreover, the 3D illusion is said to disappear when the screen is viewed from a tilted angle.

With the MIT approach, the top LCD surfaces a pattern customized to the image below it instead of utilizing vertical band or pinhole systems. Here, the parallax barrier has numerous tiny slits whose orientations trail the contours of the objects in the image. Since the slits are adjusted at various angles, the 3D effect remains consistent even when the screen is upright or rotated by 90°.

The real success here is thought to be full parallax motion or a display that shows multiple perspectives in horizontal and vertical directions. If the HR3D MIT glasses-free 3D approach does turn out to be viable, we might just see manufacturers taking the 3D route much faster since goofy glasses and high energy consumption shouldn’t offer any kind of trouble.