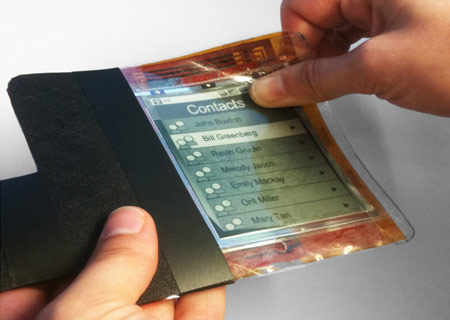 If Sony’s rollable OLED display had everyone gaping at its contortionist skills, that’s nothing to what this next flexible technology can do. A development team at Queen’s University has conjured a smartphone prototype dubbed PaperPhone.

It basically comprises a 9.5cm diagonal thin-film flexible E-ink display. It functions like a regular smartphone with the ability to store books, make calls or play music. The researchers seem to think that calling it a flexible iPhone is the best way of describing this technology which ought to usher in extremely lightweight, thin-film and flexible computers.

“This is the future. Everything is going to look and feel like this within five years. This computer looks, feels and operates like a small sheet of interactive paper. You interact with it by bending it into a cell phone, flipping the corner to turn pages, or writing on it with a pen,” explains Roel Vertegaal, director of Queen’s University Human Media Lab.

“The paperless office is here. Everything can be stored digitally and you can place these computers on top of each other just like a stack of paper, or throw them around the desk,” continues Vertegaal.

The PaperPhone will be seen at the Association of Computing Machinery’s CHI2011 conference at Vancouver next week. Also lined up for display is a thin-film wristband computing gizmo christened ‘Snaplet’.

The developers at Queen’s envision a future of paper-free office environments with this kind of technology.