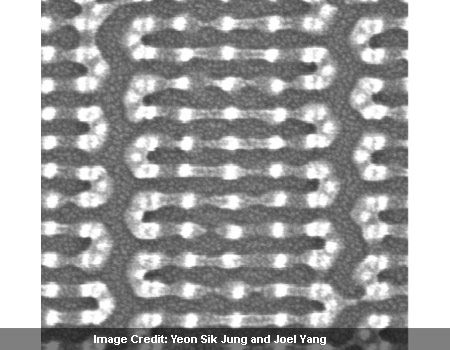 With the kind of devices being belted out these days, it’s no surprise that the functions on computer chips are getting really small. However there seems to be hardly any change in the process of making these chips. Researchers from MIT claim to have been exploring the possibilities of creating tiny circuits with the help of molecules that automatically arrange themselves in patterns that may be useful.

Seemingly, the capability of molecules to arrange themselves into predictable patterns could lead to computer chips that have much smaller features. Scientists from MIT now appear to have moved a step ahead in actually taking that practical approach. Presently chips are built layer by layer in a process called photolithography. The method includes deposition of a layer of silicon, metal, or some other material on a chip which is then coated with a light-sensitive material, called a photoresist.

The major hurdle with this technique allegedly is increasingly small size of chip features which could be smaller than the wavelength of light used to make them. Apparently, manufacturers have come up with a host of tricks so as to get light to generate patterns that may be smaller than its own wavelength. However their inability to work at smaller scales has been revealed. Using beams of electrons to transfer mask patterns to layers of photoresist should be the obvious method for thus shrinking the features of a chip.

Though much unlike light, that may gleam through a mask and bare an entire chip at once, an electron beam may have to move back and forth across the surface of a chip in parallel lines. Seemingly, this would render electron-beam lithography a significantly more expensive process as compared to conventional optical lithography.

A different approach is claimed to have been taken by Caroline Ross, the Toyota Professor of Materials Science and Engineering, Karl Berggren, the Emanuel E. Landsman Associate Professor of Electrical Engineering, and Yeon Sik Jung and Joel Yang. The scientists employed electron-beam lithography much more sparingly, to generate patterns of tiny posts on a silicon chip. Following this, they deposited specially fabricated polymers on the chip. These are molecules in which smaller, repeating molecular units are linked into long chains. It was observed that the polymers spontaneously harness up to the posts and have themselves arranged into useful patterns.

Earlier research has revealed that getting molecules to self-assemble needed some kind of template on the chip surface. It could either be a trench etched into the chip, or a pattern created via chemical modification. Interestingly by removing that template, Berggren and Ross’ approach could render the self-assembly method of manufacturing chips as much more efficient. In the novel technique, the scientists employed ‘copolymers’ that were made of two variating types of polymer.

The different types of polymer chain are seen to arrange themselves into predictable patterns due to their attempt to segregate from each other. Ross, Berggren, and their colleagues produced a large range of patterns useful in circuit design by simply varying the length of the chains, the proportions of the two polymers, and the shape and location of the silicon hitching posts.

Ross and Berggren are now working to find arrangements of their nanoscale posts that will create functioning circuits in prototype chips. They are trying to refine their technique so as to develop chip features that are even smaller.