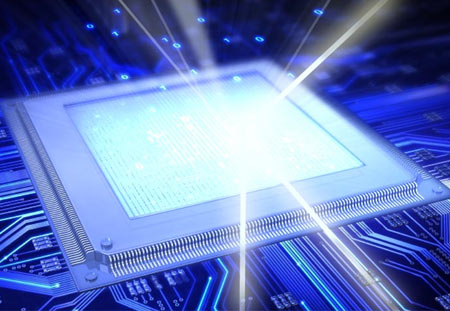 Researchers at MIT demonstrate the shift towards computers that use light in place of electricity to move data. The researchers have apparently built the first germanium laser that claims to emit wavelengths of light that could be useful for optical communications. It is also believed to be the first germanium laser that operates at room temperature.

Much unlike materials that could be typically used in lasers, germanium is supposedly simpler to incorporate into existing processes for manufacturing silicon chips. Suggesting an important step towards computers that shift data and could probably also perform calculations employing light instead of electricity. ‘

Contrary to prior belief, the researchers seem to have exhibited a type of materials called indirect-band-gap semiconductors to yield practical lasers. With the computational capacity of chips augmenting, the need for higher bandwidth connections also seems to have surged. With conventional electrical connections increasingly needing more power to transport data at higher rates, they may soon become impractical.

Lasers used in today’s communication systems are fabricated from materials like gallium arsenide that may be expensive. The integration of germanium into the manufacturing process may however have the potential to do what almost all major chip manufacturers have already started to. This is mainly because adding germanium could speedup the silicon chips.

The researchers reveal that in a semiconductor crystal, an excited electron will break free and enter the so-called conduction band. This is where it may probably be able to move freely around the crystal. An electron in the conduction band may however be in one of two states. While in direct-band-gap materials like gallium arsenide, the photon is in the first or emitting state that is a lower energy one, indirect-band-gap materials like germanium, it is the opposite.

With Jurgen Michel, the principal research associate in the group as the primary investigator on the project, the lead author was postdoc Jifeng Liu. Kimerling and grad students Xiaochen Sun and Rodolfo Camacho-Aguilera are also coauthors.

Using two strategies, the researchers could coax excited germanium electrons into the higher-energy, photon-emitting state. Using the technique of doping, germanium was added to phosphorous in the first one. As part of the second strategy, the energy difference between the two conduction-band states was lowered. This was done so that the excited electrons would have higher chances of spilling over into the photon-emitting state.

For this, the researchers used another common technique of the chip industry in which they strained germanium or pried its atoms slightly farther apart than they would be naturally. This was done by growing it straight on top of a layer of silicon.

Currently, the researchers are looking at finding a way to augment the concentration of phosphorus atoms in the doped germanium. Doing this would increase the power efficiency of the lasers rendering them as attractive sources of light for optical data connections.

A forthcoming paper in Optics Letters describes these results.