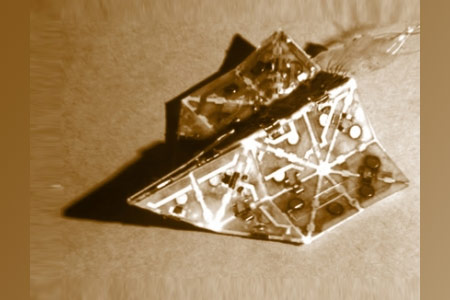 A major area of research in distributed robotics is known to be ‘programmable matter’. It supports the idea that tiny, uniform robots may have the ability to snap together akin intelligent Legos. This in turn may help fabricate larger and more versatile robots. Researchers at MIT and Harvard have collaborated to structure what they term as ‘the ultimate reconfigurable robot’. A combination of origami and electrical engineering, self-folding sheets of a plastic-like material may have the potential to form robots that can take any conceivable 3-D structure, they say.

Having developed algorithms, the researchers suggest that given a 3D shape, reproduction of it by folding a sheet of semi-rigid material can probably be ascertained. The material in question also seems to be attributed with a unique pattern of flexible creases. The scientists tested their theories with the help of a prototype that could automatically embrace the form of either an origami boat or a paper airplane on receiving different electrical signals.

Director of the Distributed Robotics Laboratory at the Computer Science and Artificial Intelligence Laboratory (CSAIL), Professor Daniela Rus analyses robotic systems which can work in tandem to take care of complex tasks. According to Rus, the approach using particles that are capable of reversibly assembling into complex 3D objects put forth by the Programmable Matter project of the DARPA has many pitfalls.

Rus mentions, “Most people are looking at separate modules, and they’re really worried about how these separate modules aggregate themselves and find other modules to connect with to create the shape that they’re supposed to create. Actively gathering modules to build up a shape bottom-up, from scratch, is just really hard given the current state of the art in our hardware.”

This led the investigator to detail alternative methods that don’t need separate modules for locating and connecting to each other prior to assembling into more complicated shapes. Rus together with CSAIL’s Erik Demaine, who joined the MIT faculty at age 20 in 2001, brainstormed the use of a flat sheet of material sporting small robotic muscles or actuators. The latter could fold itself into useful objects. They reveal that in principle, flat sheets fitted with flat actuators should be easier to tailor in comparison to 3D robots and that too with enough acuity, giving them the ability to locate and attach to each other.

Nearly a year back, the researchers are said to have given evidence that a massive sheet creased in a ‘box pleat pattern’ could be crimped into possibly any 3D shape. Splitting the sheet into squares, the motif reveals each having a diagonal crease across it. When two squares share an edge however, their diagonal creases may appear to be mirror images. Reportedly, this is the first time that the wholeness of a crease pattern has been revealed. On the basis of this observation, the researchers then formulated algorithms which when given a whimsical 3D architecture could create a series of folds, producing it from a box-pleated sheet.

With no robotic system known to have the ability to execute that sequence spontaneously as yet, the researchers hoped to showcase the viability of the complex approach involved. This led them to fashion another group of algorithms. They worked at showing sequences of folds for various shapes would ascertain the minimum number of actuators needed to generate all of them. This put them on the way to build a robot that could assume multiple origami shapes in real. They tailored a prototype assembled from glass-fiber and hydrocarbon materials having an elastic plastic at the creases. It was divvied up into 16 squares approximately a centimeter across, each of which was additionally split into two triangles. Actuators comprised of a shape-memory alloy and each triangle also included a magnet, allowing the latter to bind to its neighbors on completion of correct folds.

In principle, it may be possible to design either an identical sheet infused with much tinier moving parts, or a larger sheet having similar-sized moving parts.

“With a finer-grained sheet, you could imagine downloading the new iPhone,” Demaine shares. “In the same way that you download the latest CD from your favorite artist totally electronically, you could imagine downloading shapes electronically, and programming hardware the same way you program software. Larger sheets could enable a tent that can adapt its shape according to the wind so that it doesn’t blow over or a solar cell that can adjust its shape to the sun and the cloud patterns and whatnot.”

Moreover, Demaine cites his group to be approaching the problem from two angles. While one reveals them to be working on a mathematical model for the flexibility of the triangles, making it easier for folding algorithms to take it into account, the other approach sees them taking some first steps towards a theory of origami with rigid materials.

The results have been reported in the July 13 issue of the Proceedings of the National Academy of Sciences.

Wearable Sensor May Aid In Assessing Stress In Healthcare Workers

Wearable Sensor May Aid In Assessing Stress In Healthcare Workers