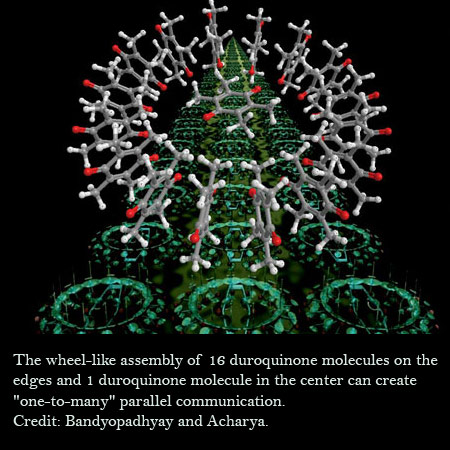 The world’s smallest computer, which is literally as small as a couple of molecules, has been developed. It can apparently imitate how the human brain works and is in fact 16 times faster than most conventional modern-day computers.

The first ultra-tiny, ultra-powerful “brains” for nanobots have been developed by scientists Anirban Bandyopadhyay and Somobrata Acharya from the National Institute of Materials Science in Tsukuba, Japan.

Bandyopadhyay noted that the work of the device is very similar to the way brain cells interact.

The tiny computer is made of duroquinone, a molecule looking like a hexagonal plate with four cones attached to it. It is known as a ‘logic device’. Duroquinone is less than a nanometer large, which is hundreds times smaller than a wavelength of a visible light. Made of 17 duroquinone molecules with one molecule positioned in the center and 16 others making up a ring, this little wonder rests on a gold surface.

The state of the control molecule at the centre is switched by a scanning tunnelling microscope (STM).

A pulse sent to a central molecule, which has four cones and is connected to another 16 duroquinones will result in approximately 4.3 billion different operations if compared to two different results a normal computer transistor can perform.