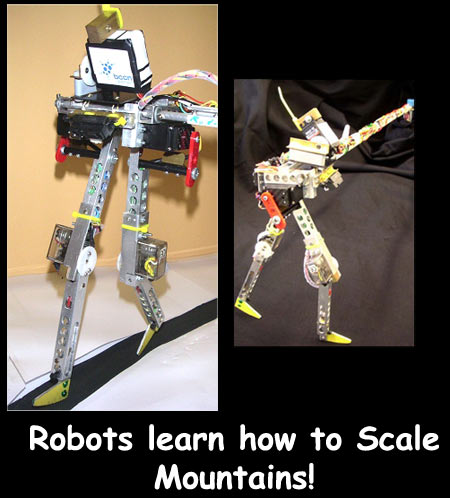 Robots are getting smarter! According to German researchers, a walking robot that adapts to different terrain is currently assisting scientist in understanding how humans move. One day, they hope that such robots can offer clues to improved treatment for spinal cord and other injuries.

Indeed, the human gait is a marvel of coordination. All aspects of movement control right from the angle of the knee joints to the momentum of the hip to the balance point of the torso need to be carefully adjusted.

RunBot, the inventors of the robot had previously reported that the 30 cm tall robot could only walk forward on flat surfaces. The robot toppled over when it came across a slope.

Now, using an infrared eye, this very robot is able to detect an incline in its path and accordingly adjusts its gait after four or five attempts to navigate up the slope.

According to Florentine Woergoetter, a researcher at the University of Goettingen who helped design RunBot, “It is trial and error learning.”

Woergoetter, who published his findings in the journal Computational Biology, compared the process with the way a child learns to walk. He said just like humans, RunBot leans forward slightly and uses shorter steps to navigate uphill.

A key is the robot’s “brain” — in this case the infrared eye connected to the control circuits — which directs the machine to change its gait when needed.

Previous research suggests the motor control system in humans consists of a hierarchy of levels where interactions between muscles and the spinal cord work largely on their own until a higher level of control — the brain — is needed.

This relationship can help explain how some paraplegics are able to use their legs on a treadmill while suspended in a harness, and was key to the research, Woergoetter said.

Studying a robot to gain a better understanding of how different parts of the body work when walking could have practical applications to improve health care for humans, he added.

This could include designing better prosthetics for amputees or helping therapists work with patients with spinal cord and other severe injuries with a goal of getting them mobile again.

“The robot is essentially a model of the human biped walking and can be used to improve understanding and for better treatment methods,” Woergoetter said.