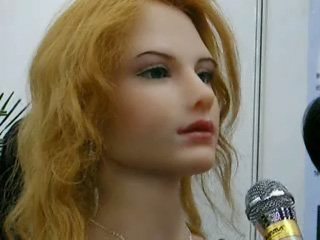 China displayed their robots at a robot show in early October. One of the biggest highlights of the show were the highly human-like robots.

However it is yet a little bit too early to dub these human copies as robots since their actions and abilities are way too limited. For instance, the female humanoid above only sings and moves her lips a little (that too in a highly robotic manner).

The Chinese robot, nicknamed ‘Dion’ does score a point above the Japanese Actroid female robot with respect to the body precisions and stats (though I do wish they’d given her better tresses), but I yet do find the latter cuter and more convincing than the Chinese one.

You can watch a video of the blond robot here.