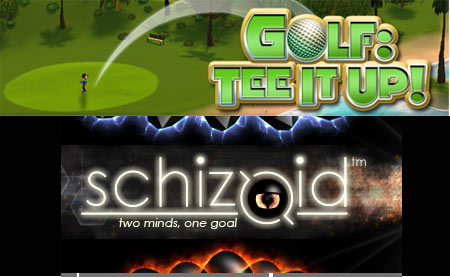 Microsoft has announced to launch two new games on Xbox Live Arcade. Schizoid and Golf: Tee It Up! are new games, which will hit on the network on July 9th.

Schizoid is an action game with simple, intuitive gameplay. Players can enjoy the game solely with single player mode or have fun with other online gamers through multiplayer mode. Moreover, it features Uberschizoid game mode in which a single player can control two different ships simultaneously. The Schizoid features over 120 challenging levels of mayhem which are claimed to be appealing for casual as well as hardcore gamers.

Schizoid can be bought through Xbox Live Arcade for 800 Microsoft Points. It is rated E for Everyone by the ESRB.

On the other hand, the Golf: Tee It Up! is a full 18-hole multiplayer tournament. The game is especially designed for golf lovers. Beginners as well as experienced golfers will enjoy the game. For more excitement, the game features whacky and customizable characters. Also a variety of game modes including stroke, cup, or match play with local or Xbox Live multiplayer modes are included in the game.

Golf: Tee It Up! is developed by Housemarque and published by Activision will be available for 800 Microsoft Points and is rated E for Everyone by the ESRB.