Say it ain’t so: Sony not updating Xperia L, M, C and SP to Android 4.4 KitKat

A few weeks earlier, we got confirmation that the Xperia T, TX and V smartphones would be stuck on Android Jelly Bean for the rest of their lifetime and now, we can clarify that the Sony Xperia L, M, C and SP will be joining the group. This is quite surprising considering that the Japanese OEM has updated its entry-level devices such as the Xperia E1 and M2 to version 4.4 KitKat.

The Xperia T, TX and V smartphones are from Sony’s 2012 lineup which means that they fall outside the company’s update policy and they also have outdated chipsets. However, the Xperia L, M, C and SP are from just last year and they feature processors which are still supported, especially the Xperia SP that ships with a dual core 1.7GHz Snapdragon S4 Pro. 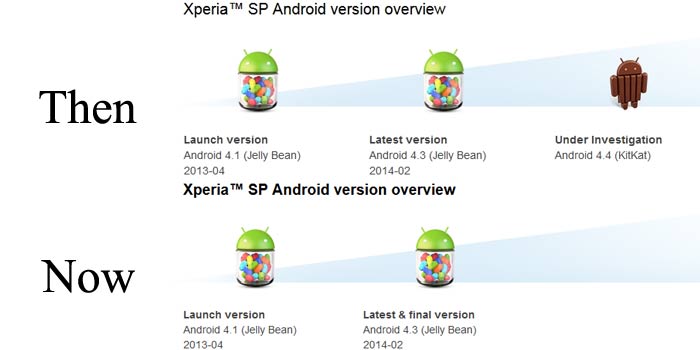 This SOC is also found in the original Moto X that’s currently on version 4.4.4 KitKat and is promised to receive Android L in the coming months. The company hasn’t officially disclosed that these phones won’t get a new Android flavor, but their software update pages have been updated to denote so.

Android Police notes the web pages now carry the words ‘Latest & final version’ with Android 4.2/3 Jelly Bean listed below. While this clearly means that no new major updates will rolled out, you can still expect to see small firmware being pushed to fix bugs and deliver new applications.

Lack of new Android versions doesn’t mean that your Sony Xperia L, M, C or SP has become redundant and if you desire to experience the latest from Google, custom ROMs are your best bet for now.