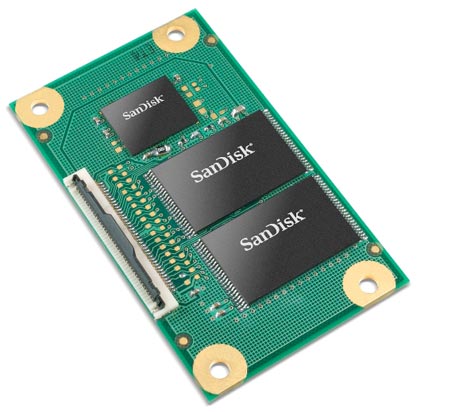 SanDisk has launched a line of flash memory-based solid-state drives (SSDs) that are designed especially for Ultra Low-Cost PCs (ULCPC), which are available for $250-$350. The new pSSD (Parallel ATA solid state drive) eliminates the need for a hard disk drive. Besides, it stores both, the operating system and application data for these new devices.

The new SanDisk product will be available in three capacities namely in 4-, 8- and 16 GB. Further they are capable of streaming read speed speeds of 39 MB per second (MB/s) and a streaming write performance of 17MB/s. Moreover they are compatible with Linux and Microsoft Windows XP operating systems.

“We’re excited to be involved in this emerging market of ULCPCs, which take the concept of affordability into new directions – ones that are ideally suited to the multiple benefits of SanDisk’s technology,” said Rich Heye, Senior Vice President and General Manager at SanDisk’s Solid State Drives (SSD) Business Unit. “Based on consumer response to some of the first ULCPCs, these devices are quickly developing a popular following. Our new pSSDs are enablers for manufacturers to create what could become the next wave of personal and portable computing devices.”