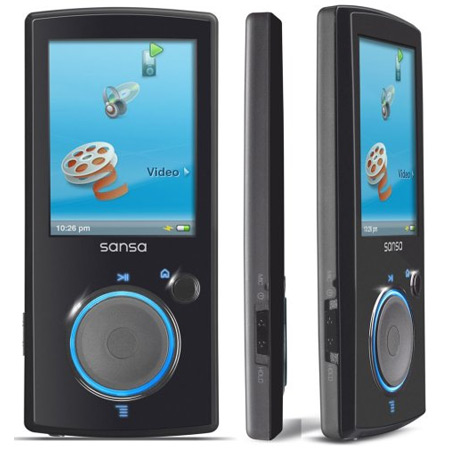 The Sansa View sports a 2.4-inch TFT color screen with 320×240 resolution to watch movies and photos. Available in two models, 8GB and 16GB, the memory can be further expanded to 24GB, by inserting an additional microSD/microSDHC card. Its long-lasting lithium battery assures users of approx. 35 hours of music and around 7 hours of video.

In addition the super-slim SanDisk Sansa View, which has an astounding 8.8mm thickness, is packed with an in-built voice recorder and microphone.

The new player has the ability to play various audio files such as MP3, WMA, WAV and DRM-free MP3 downloads; Digital FM radio with 20 pre-sets and several video formats including MPEG4, WMV and H.264. It can also play photos up to 16 MP.

Eric Bone, vice president of marketing for SanDisk’s Sansa audio/video product line stated, “The Sansa View is a new video MP3 player that combines all of the great characteristics of a MP3 player with the video capabilities of a PMP, and packs it into a pocketable device.” Adding, “What’s more, we’re once again showing that category-leading technology can still be very affordable,” continued Bone.

To use the SanDisk player, users need to have a Windows system with Windows Media Player to sync music and videos.

The SanDisk Sansa View media player with 8GB memory is priced at $149.99, whilst the larger 16GB version comes for $199.99. Though there is not definite info on its availability, it should hit stores anytime in October.