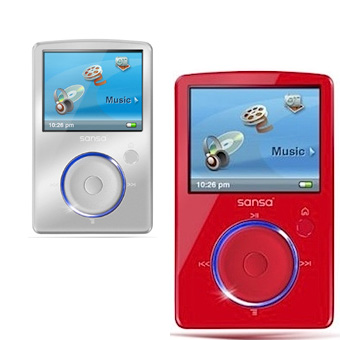 In addition if there are some great poetry lines going on in your mind and you have no place to pen them down, then you can use the Sansa Fuze’s voice recording function to record those lines. Also, there’s a bright 1.9”color screen that makes it possible for users to easily navigate their music or watch videos in landscape mode. The player comes in capacities of 2GB, 4GB and 8GB.

Eric Bone, vice president of product marketing for Sansa, SanDisk’s audio/video product line said, “The Sansa Fuze is an eye-catching player that consumers will enjoy for its looks, capabilities and incredible value.” Bone added, “This new MP3 player combines some of the best features found on other Sansa products, including great sound quality. It’s yet another strong offering by SanDisk in the sub-$150 music player market.”

With the Sansa Fuze player’s microSD card slot consumers can quickly add content onto their device and expand storage capacity, giving enough space for thousands of additional songs, hours of video and numerous photos. In addition, music and various other content can be easily transferred from the player onto mobile phones and PCs.

With the Sansa Fuze MP3 player, users can gain access to subscription download services from a number of sources, including Rhapsody To Go, Napster, eMusic and others. Furthermore, it supports playback of a wide range of renowned music formats such as MP3, WAV, Audible (for audio books) and Windows Media Audio (WMA) in both unprotected and protected files. SanDisk’s new player supports MPEG-4 video and JPEG photos. Its internal rechargeable battery will play up to 24 hours of audio and 5 hours of video between charges.