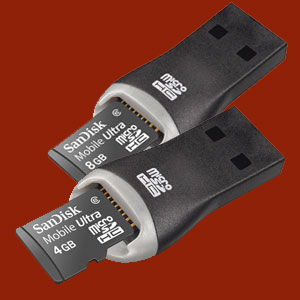 It is a common complaint that mobile phones run slowly or lag due to the extra pumping given to it through the external memory card. Now to solve the age-old issue of slow transfers and freezing, SanDisk has come up with the SanDisk Mobile Ultra Cards which provide the same amount of storage space and faster transfer speeds.

The memory card promises amazing speeds and data transfers and one can access files, songs, and pictures in a quicker manner. To add in faster speeds, the Mobile Ultra Cards also promise blistering speeds while using it with the computer as well. The secret of faster speeds is its Hi-Speed USB 2.0 MobileMate Micro Readers which accelerates its data transfer and makes file managing easier.

The cards are easy to install and use and gel well with Windows Vista and are certified for Windows XP and Mac OS X operating systems. The SanDisk Mobile Ultra Cards present themselves in ranges of 2GB-8GB options and version of microSDHC and Memory Stick Micro. The cards will carry price tags ranging from $35 to $130 which will depend on the size and type of card chosen. The cards also claim to work well with other gadgets as well like portable media players, cameras and other storage devices.