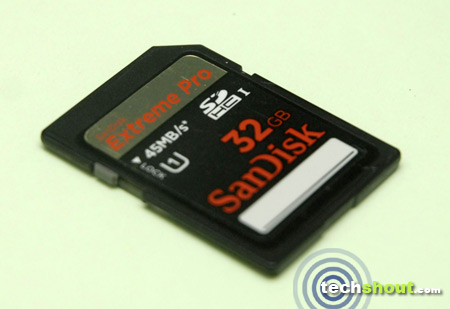 Memory products evidently play a vital role in our tech-imbued lives and one such storage solution just reached us for an all-inclusive review – the SanDisk Extreme Pro SDHC UHS-I card. This SanDisk card has decided to step aside from its clan with abilities exhibiting its importance in high-end cameras. It ropes in advanced attributes like Ultra High Speed (UHS) technology and ProRescue media software.

We received the SanDisk Extreme Pro in a simple brown envelope without any packaging or printed material. This tiny tot has information like 32GB storage space, SanDisk and Extreme Pro imprinted in red while it clearly boasts of 45MB/s speed printed in white. The card also comes with the physical lock push switch, minuscule enough to be operated with your nail tips. We received the 32GB unit and one can pick from storage capacities ranging from 8GB to 32GB. Successor to the SanDisk Extreme SD card that offers 30Mb/s speed, it has definitely taken a leap ahead.

The hardened plastic used to craft this storage product makes it appear sturdy. SanDisk has taken all necessary precautions to ensure that your critical snapshots are safeguarded from intruders. The company adds resistance against water alongside others like temperature, shock, vibration and more. This makes the card reliable even in harsh conditions. 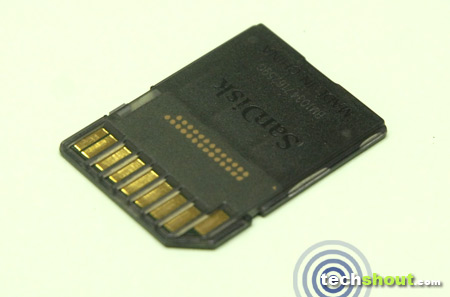 The key ability highlighted in the camera is the incorporated UHS-I technology that comes following the new SD 3.0 specification. It is speedier with the ability to deliver 45Mb/s. Now, to extract the complete benefits of the card one needs to use it with a device supporting this technology like the Nikon D7000. This doesn’t mean that the SDHC card isn’t backward compatible. However, we didn’t see it perform to its fullest when used with other devices.

Evidently, aimed at a high-end camera like the D7000, SanDisk Extreme Pro SDHC UHS-I card helps with burst shooting and also HD videos. Well, these days swifter storage of HD and 3D content has been gaining importance and the Extreme Pro plans to adhere to it. Professional photographers could also heave a sigh of relief as this card is capable of recovering images which were accidently deleted. The card equips an automatic error-code correction (ECC) engine that promises reliability.

One may notice its swift abilities while taking continuous shots in buffer. As aforementioned, the card is compatible backwards with devices supporting SDHC and SDXC but the glitch is that users cannot take advantage of its 45Mb/s speed unless used with devices like the D7000. The all new UHS bus interface hasn’t becomes a commoner on devices yet. Well, if this brings the 30MB/s Extreme into the picture then Extreme Pro’s price tags may make you change your mind. 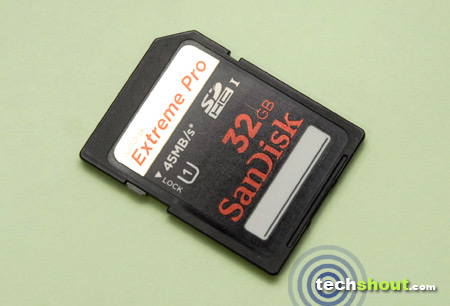 To leverage complete benefits of the card, it should be used with devices that support the UHS technology like the Nikon D7000.

The SanDisk Extreme Pro SDHC UHS-I card ensures swift performance with speed up to 45Mb/s if used with a device supporting the UHS technology. Its predecessor SanDisk Extreme Pro could be a great pick for many but astonishingly, this SanDisk card carries a price tag dwindling near the prices posed by these cards. The suggested retail price stretches from Rs. 3299 to Rs. 12,499 for cards ranging from 8GB to 32GB. It is available through major retailers and the SanDisk website in India. On our rating meter, it gets 8 out of 10.