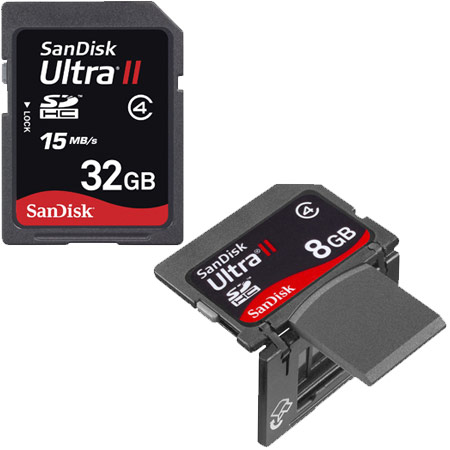 Here’s some great piece of news for not only pro-photographers but budding ones too who keep clicking pictures left, right and center to better their skills. SanDisk has boosted the capacity as well as speed of its Ultra II range with the launch of 32- and 16GB SDHC cards and an 8GB SDHC Plus card. The announcement was made at the PMA 08 International Convention.

Perfect for the present day camcorders and point-and-shoot digital cameras that have the ability to record both video and still images, the new enhanced SanDisk cards offer faster read and write speeds of 15 megabytes per second2 (15MB/sec), up from previous speeds of 10MB/sec read and 9MB/sec write in the SanDisk Ultra II line.

Susan Park, senior product marketing manager for SanDisk Ultra II cards said, “As cameras offer more megapixels and as new high-definition ‘record-to-memory-card’ camcorders are being introduced, the image sizes and files get bigger, requiring higher card capacity.” Adding, “Cameras also are increasingly used for recording video clips, which demand even more memory and capacity. These mega-capacities in our SanDisk Ultra II line give users the worry-free ability to capture thousands of their memories and hours of HiDef video on a single card, while the faster write speed can reduce the time between shots and the faster read speed reduces time spent waiting to copy those images to a computer.”

The 32GB Ultra II SDHC card marks the highest capacity consumer flash memory card that SanDisk has produced till date. It will have the capacity to store over 8,000 high-resolution pictures or up to 40 hours of video. A SanDisk MicroMate USB 2.0 Reader, priced at $20, is bundled with the 32GB and 16GB cards, eliminating the worry of transferring of images.

The 8GB SanDisk Ultra II SDHC Plus blends SD and USB functionality in one. It has been developed using SanDisk’s unique, patented Hinge Lock technology. The card can be inserted into a USB port on any computer. So now get free from the hassles of carrying extra cables or card readers for transferring photos and videos from cameras.

SanDisk’s 32GB Ultra II SDHC card with MicroMate USB 2.0 Reader is priced at $349.99 and is slated to be available worldwide by April. Launching across the globe in March itself, the 16GB card with reader comes at a suggested price of $179.99, and the 8GB SanDisk Ultra II SDHC Plus card has an MSRP of $99.99.

So start getting ready to click to your heart’s content as all your previous space constraints issue are sure to be erased with the SanDisk’s new products.