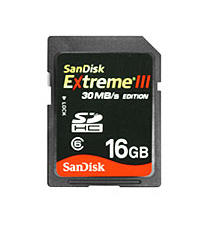 SanDisk announced its new SDHC card which transfers data at a blazing 30MB/s. The new Extreme III 30MB/s Edition line of SDHC Cards range is scheduled to be available by September 2008.

When the card is placed in SanDisk’s new ImageMate Multi-Card USB 2.0 Reader/Writer, users can easily transfer their images as well as videos with the outstanding speed of up to 30MB/s. The increasing use of DSLR cameras demanded a faster SDHC card speed, claims SanDisk.

Talking about the achievement Susan Park, director of consumer product marketing for SanDisk’s performance cards said, “The high capacities and performance of the SanDisk Extreme III 30MB/s Edition SDHC cards give users the freedom to shoot lots of high-resolution photos and video clips.”