Samsung’s Unpacked 2014 Episode 1 takes place at MWC, will it unveil the Galaxy S5?

Samsung is expected to unveil a new range of devices at the MWC 2014, but the Grand Neo, Note 3 Neo and Tab 3 Lite have already gone official. So, what’s left? The company is said to be working on Tizen handsets and also Windows Phone powered ones. Apart from this, the Galaxy S5 is rumored to arrive in March, or could it be unveiled earlier?

Samsung has announced that it will host its Unpacked 2014 Episode 1 event on February 24. The venue is Spain, Barcelona, at the MWC 2014 expo. Unpacked events are normally for major product launches and the only highly anticipated device from Samsung we’re aware of is the Galaxy S5. 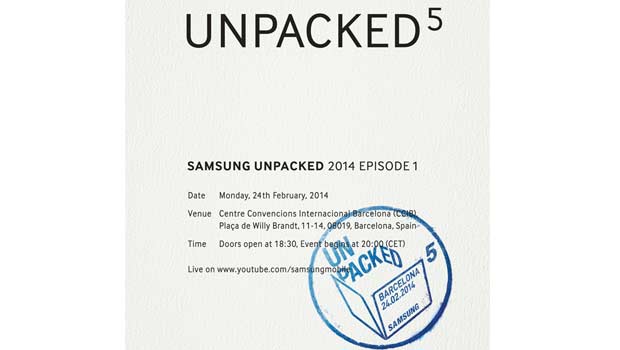 The first Tizen devices, on the other hand, will be showcased at an event scheduled for a day before the Unpacked one, on February 23. This leads us to believe that Samsung could unveil the Galaxy S5 at the expo and make it available in the market sometime in March or April, unless it has something better up its sleeves.

The Samsung Galaxy S5 has been leaked numerous times. We’ve seen specifications and even different models of the handset. The company will launch the device in the usual configurations, one with its Exynos processor and another carrying a Snapdragon chipset for LTE markets. Additionally, there’s word on plastic and metal models, while mini and Zoom variants have also been leaked.

Here are the specs of the upcoming flagship:

Where price details are concerned, the plastic Galaxy S5 will be available for €650, while the metal version will sell for €800. These amounts are based on leaked information.