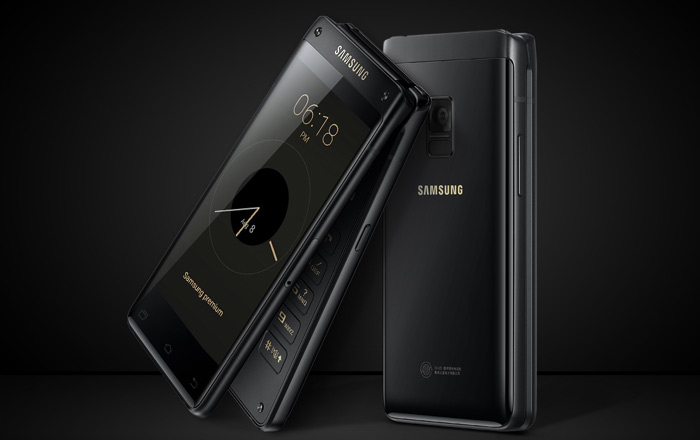 Samsung’s been launching a steady stream of throwback flip phones for a couple of years now and the latest one to be added to this list is the SM-G9298. Like its predecessors, the phone is meant as a luxury take on the clamshell form factor, getting fitted in aviation-grade aluminum alloy in black and gold colors.

The SM-G9298 is also called the Leadership 8, a nod to the businessmen the phone considers its target audience. Glancing over its specs, the phone is a minor refresh over the W2017. The biggest change comes in the form of the faster Snapdragon 821 processor, with minor changes including things like a heavier body.

In terms of photography, there’s a 12MP rear camera which features a wide aperture of f/1.7 to pave the path for better low-light photography. It’s accompanied by a 5MP selfie snapper with an f/1.9 aperture. There are two 4.2-inch Super AMOLED full HD displays on hand here, with one placed on the outside and the other on the inside.

Samsung hasn’t specified which Android OS version the flip phone runs on, but it’ll probably be Nougat given its premium status. Unfortunately, the company hasn’t revealed its price details yet.

Specifications of the Samsung SM-G9298 at a glance:

Samsung also hasn’t revealed whether the SM-G9298 will be available outside China. It typically doesn’t release its retro line outside the country, so it’s best not to keep your hopes up.