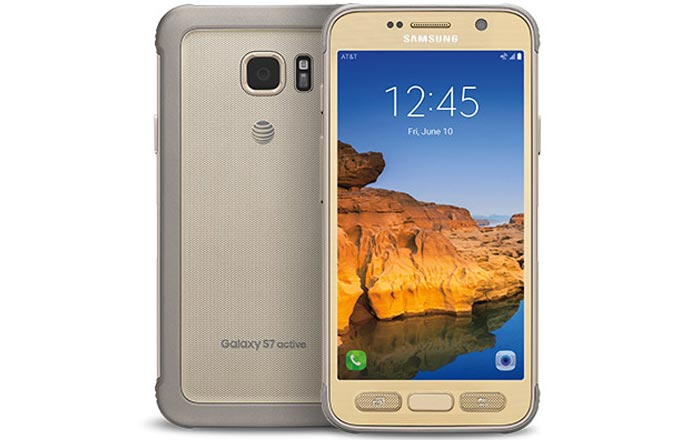 As expected, Samsung has officially unveiled the Galaxy S7 Active in association with AT&T for sale in the US. Like its predecessors, the new phone is a toughened-up version of the regular flagship with added bells and whistles.

The new Samsung Galaxy S7 Active is notably the first handset in the rugged series to feature a fingerprint scanner. While it mostly sticks to the established S7 formula, it offers a few major add-ons in order to appeal to adventure-seeking types with butter fingers.

First there’s the Galaxy S7 Active’s shatter resistant screen. The brand promises the display can survive 5 foot drops on a flat surface, so don’t go throwing the phone off a cliff just yet. Next, it’s been blessed with IP68 certification to make sure it can make it through 5 feet of water for 30 minutes and live to tell the tale.

Also Read: Samsung Galaxy S7 Edge Injustice Edition is here for all you Batman fans out there

Finally, Samsung has stuffed the hardy offering with a 4000mAh battery. The unit can apparently last for 32 hours of talk time and takes less than 2 hours to fully power up, a useful ability in extreme environments. It’s also bigger than the standard S7’s 3000mAh battery.

A quick rundown of the top specifications of the Samsung Galaxy S7 Active:

The Samsung Galaxy S7 Active is priced at $750 upfront and will be sold via AT&T online and offline stores on June 10. Buyers also have the option pay $26.50 monthly for 30 months or $33.13 monthly for 24 months. Early birds additionally get a Gear S2 for free.