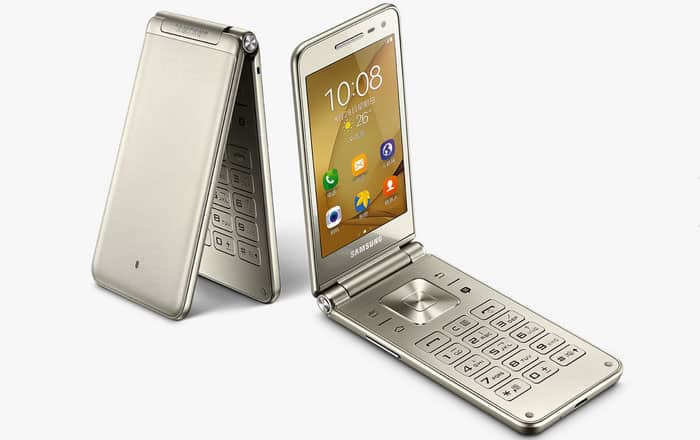 Samsung is going old school by launching a brand new Android-running flip phone dubbed the Galaxy Folder 2 in China. The handset has been spotted on the company’s official Chinese website, with no word on whether or not it plans to bring the device to other territories anytime soon.

The Samsung Galaxy Folder 2 looks similar to its previous variant with a few notable changes inside and out. As far as appearances go, it features a new silver color option and revamped physical keypad. Under the hood, it packs decent mid-range specs like Android 6.0.1 Marshmallow and 16GB of inbuilt storage.

The Galaxy Folder 2’s memory capacity can be further expanded up to 128GB via a microSD card slot. The clamshell gets things done with the combined power of a 1.4GHz quad-core Snapdragon 425 processor and 2GB of RAM. The all-metal phone flaunts a 3.8-inch screen which outputs its visuals in a resolution of 480 x 800p.

Also Read: Galaxy Note 7 banned from flights even as phone causes Jeep to go up in flames

As for its photography skills, the Samsung offering sports an 8MP rear camera which has been equipped with an f/1.9 aperture. There’s also a 5MP front-facing snapper for selfies and video calls. The dual-SIM device further offers connectivity options like 4G, VoLTE, Bluetooth 4.2, microUSB 2.0, Wi-Fi, GPS, GLONASS, and Beidu.

Here’s a rapid summary of the top specifications of the Samsung Galaxy Folder 2:

We’ll let you know more about the price and availability details of the Samsung Galaxy Folder 2 the moment it hits international markets outside China.