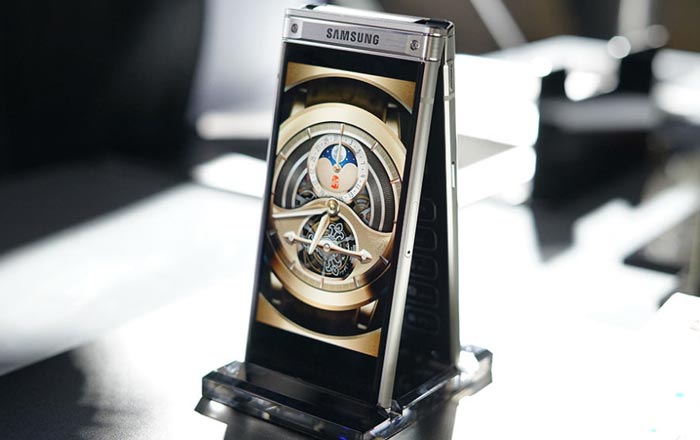 Samsung’s been steadily releasing flip phones as part of its W series for the past 10 years, long past the golden age of the handset type. It seems clamshells are still popular in China as the company recently revealed the latest addition to the lineup in the form of W2018, yet another luxury offering with top-of-the-line specs.

On paper, the W2018 can go toe-to-toe with Samsung’s flagship Galaxy S8 and Galaxy Note 8. The flippable smartphone runs on a Snapdragon 835 processor and packs 6GB of RAM. It’s been stuffed with a basic 2300mAh battery though, so power management might be an issue. The device additionally comes with Bixby support.

The W2018’s photography department is very interesting as its 12MP rear camera has a very wide aperture of f/1.5 only. The brand claims the handset can capture better photos in low light conditions as a result of its aperture. The system is supposed to switch to a standard f/2.4 aperture in normal lighting environments.

Samsung’s blessed the clamshell with two 4.2-inch 1080p AMOLED screens – one at the front and the other inside. The back has a fingerprint sensor next to the camera array, increasing the risks of smudges and failed attempts. There’s a full physical numerical keyboard and directional pad to jab at as well.

Specifications of the Samsung W2017: