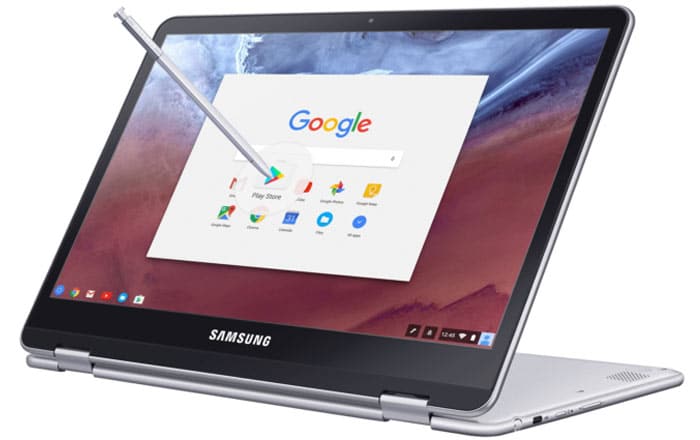 Samsung has launched the Chromebook Plus and Chromebook Pro at CES 2017, the latest additions to the series after a string of models were launched by various companies at the event. The South Korean brand’s own take on the laptops differs from the crowd by being the first to support a stylus.

The Chromebook Plus and Chromebook Pro are the result of a collaboration between Samsung and Google. The two worked together to make laptops that were built for Google Play and its Android apps from the ground up. The duo additionally offer up a number of upgrades in the form of two USB-C ports for enhanced connectivity and 4K video streaming.

Samsung has blessed the notebooks with a lightweight metal design which ensures it tips the scales at 1.08kg only. There’s also a 360-degree hinge to seamlessly switch between laptop and tablet mode. The 12.3-inch touchscreen outputs a quad HD resolution and lets users interact with it via a built-in digitized pen.

The stylus is conveniently located on the side of the Chromebooks. The new pen features a 0.7mm tip and pressure sensitivity for more accurate screen capturing. Users can use pre-installed software like Google Keep and Samsung ArtCanvas for jotting down notes and drawing, respectively.

Here’s a quick look at the top specifications of the Samsung Chromebook Plus/Pro:

The Samsung Chromebook Plus and Chromebook Pro appear to be identical in most respects except for the ARM processor used in the former and Intel Core M3 SoC powering the latter. The first is up for pre-orders here and has a $449.99 starting price tag, while the latter will emerge this Spring and doesn’t have a cost attached to it yet.