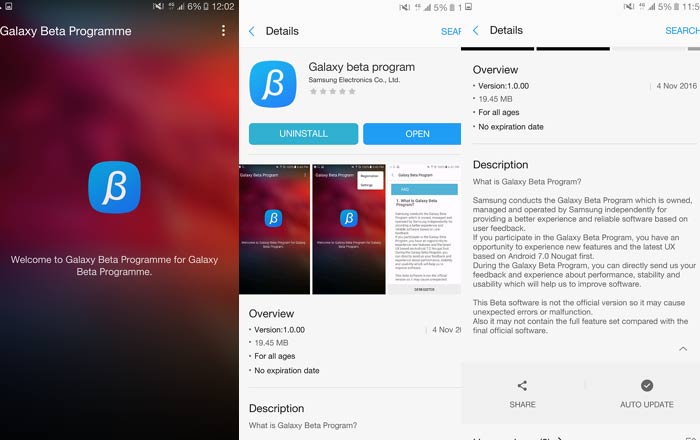 Samsung’s usually late to the update game, dragging out upgrades months after the latest version of Android is announced. As it turns out, Galaxy S7 and Galaxy S7 Edge users might not have to wait for ages to get a taste of Nougat thanks to the arrival of a new beta scheme.

The Galaxy Beta Program was first spotted last week lurking within the Galaxy Apps store. Samsung has now made things more official by releasing detailed information about its initiative. As per Android Police, the scheme will be open for membership from November 9. The primary aim seems to be to collect valuable feedback which will help engineers smooth over kinks.

Signing up for the Galaxy Beta Program involves downloading the application from Galaxy Apps, submitting an application form by heading to the Registration menu, and finally entering the relevant Samsung account login credentials. It should be noted that not everyone who applies for the program is bound to get in.

The Galaxy S7 and Galaxy S7 Edge owners who do get selected are supposed find the update to Android 7.0 Nougat waiting within the Settings menu when they check for system updates. The Galaxy Beta Program is accessible to only people residing in the US, UK, China, and South Korea.

Only US citizens who are using the T-Mobile (SM-G93xT), Verizon (SM-G93xV), and Sprint (SM-G93xP) versions of the Galaxy S7 and Galaxy S7 Edge are eligible for the initiative. AT&T and unlocked customers seemingly can’t participate. Moreover, the limited-edition Olympic Games and Batman Injustice Edition won’t be supported either.