CES 2014 for Samsung is more about tablets than smartphones. The company has revealed the existence of the Galaxy Tab Pro and Note Pro tablets and we’re likely to see its new range of handsets at the MWC next month. The former series comprises of 3 different tablets, each varying in size, while the latter is a 12.2-inch slate.

The Galaxy Tab Pro lineup comes with 12.2-inch, 10.1-inch and 8.4-inch models. Apart from the screen size and battery capacity, there’s isn’t much different between these slates. They all sport WQXGA 1600 x 2560p Super clear LCD panels and are powered by either a Snapdragon 800 SOC or an Exynos 5 Octa depending on the model. The former is aimed towards the LTE market, while the latter chip will be found in the Wi-Fi and 3G variants. 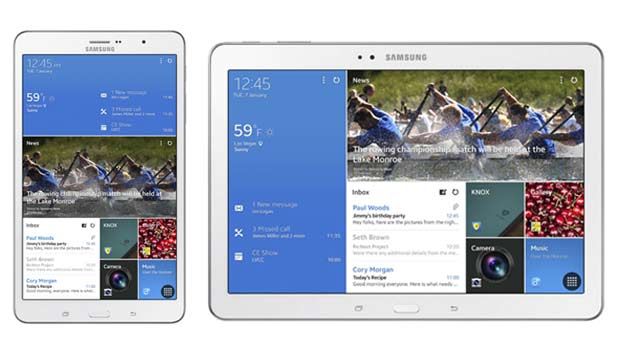 Each tablet is fitted with an 8MP rear camera and a 2MP front-facing webcam. They also share common connectivity features such as Wi-Fi 802.11 a/b/g/n/ac Bluetooth 4.0, aGPS and USB 3.0. The 12.2-inch version features 3GB of RAM and options of 32GB or 64GB storage, while the other two models have 2GB of RAM and choices of 16GB or 32GB of memory. As always, expect to see a great deal of Samsung content including the Magazine UX, Multi Window and more.

The Galaxy Note Pro is a larger version of the 10.1-inch tablet. Like all devices in this series, it also features the S Pen stylus and various software tools such as S Note, S Planner, Air Command: Action Memo, Scrapbook, Screen Write, S Finder and Pen Window. 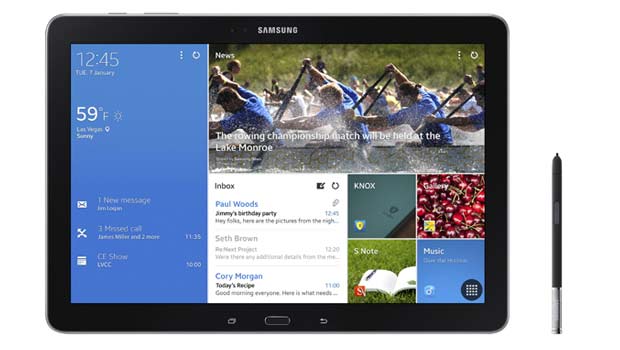 Below are the specifications of the Note Pro:

According to Samsung, the Galaxy Tab Pro and Note Pro tablets will be available worldwide during Q1 2014. No price details have been divulged as yet.