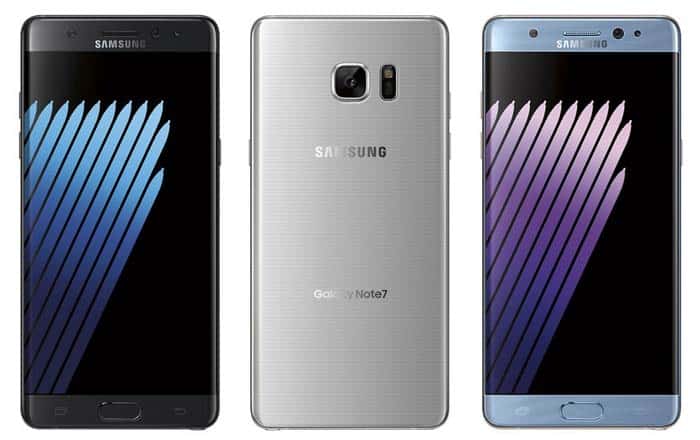 The latest tweet from serial leakster Even Blass has given away the final design as well as the name of the Galaxy Note7. There are no spaces between Note and 7, but more importantly, the phone skips the Note 6 branding in favor of more parity between the ‘S’ range of smartphones (S7 and S7 Edge) from the company.

What’s also confirmed is that this year’s Note phablet will come with a dual curved display. A stylus will of course be pushed into its body, and we won’t be surprised to see some more software additions that take advantage of this hardware.

The leaked image indicates that the Samsung Galaxy Note7 will ship in three color options, namely silver, black and blue. The three circles nears its earpiece point fingers towards the inclusion of an iris scanner which has since long been rumored to be included on this device.

This new handset from Samsung is expected to feature a 5.7-inch Quad HD Super AMOLED display. While the processor setup is unknown, it is rumored that 6GB worth of RAM will be present inside it. This is no surprise given that cheaper phones like the OnePlus 3 and the ZTE nubia Z11 are also going for this memory option.

The Galaxy Note7 will apparently come with 64GB of storage as well as a microSD card slot. Its rear camera will be 12MP in resolution, while its front snapper is expected to be 5MP. This handset will supposedly be IP68 certified like the S7 range.

The new Samsung’s Galaxy Note7 is expected to be unveiled on August 2 which is exactly a month away from now. You can expect some more leaks to pop up in the meantime; so stay tuned.